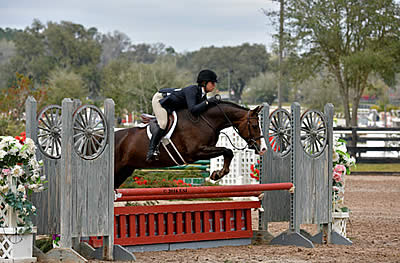 Ocala, FL (March 7, 2016): The weekend held big opportunities for competitors vying for a prestigious hunter win in Week VII of the HITS Ocala Winter Circuit. Riders descended upon HITS Post Time Farm to compete for the money in the $5,000 Pony Hunter Prix, unique to Week VII’s classes. Qualifying opportunities were also up for grabs with the $5,000 Devoucoux Hunter Prix, a qualifier for the $500,000 Diamond Mills Hunter Prix and the $1,500 Platinum Performance Hunter Prix, a qualifier for the $250,000 Platinum Performance Hunter Prix Final – both to be held at the HITS Championship in September.

Junior riders took to the course in Friday’s $5,000 Pony Hunter Prix to prove who was the ultimate in finesse and style. The team to beat was Devin Seek of Ocala, Florida and Caleche, owned by Laura Barrett-Gurtis. Seek piloted the large, liver chestnut pony to earn a consistent score of 84 in both rounds to garner the victory with a total score of 168.

Charlestown, Rhode Island equestrian Abigail Brayman took home second place with Hillcrest Songbird, owned by Canterbury Farm. Their first-round score of 74, combined with an improved second-round score of 81 gave them a total of 155 for their efforts. Brayman also placed fourth, sealing two spots in the top five aboard By Jove, owned by GC Ponies.

Also in the ribbons was Izzy Beisel of Goshen, Ohio aboard Weebiscuit, owned by David Gochman. They came in just behind Brayman with a total of 154, after earning scores of 77 in both rounds for third place.

Rounding out the top five was Casey Oliver, also from Ocala, Florida, and Posh Ponytail Ribbons, owned by Lola Head. They earned a first-round score of 75 combined with a second-round score of 65 for a total of 140, earning them the fifth spot.

Thirty exhibitors competed in Saturday’s $5,000 Devoucoux Hunter Prix in the prestigious Ocala Horse Properties Stadium. A new name emerged at the top of the leaderboard as the top twelve returned for a second round to vie for the win and other top finishing spots.

The top five places were separated by mere half-points, but it was Ocala’s own Emily Williams who piloted UpCountry Charmer, owned by Jamie Stryker, to the winning title as well as an additional spot in the top five.

Eleventh in the Order-of-Go, UpCountry Charmer flowed through the course to earn a second-round score of 87, which combined with their first-round score 86 earned them a total of 173 for the victory.

Placing just behind Williams for second was Amanda Steege of Bedminster, New Jersey and Calvary, owned by Jessica Tindley. They earned the highest first-round score of 86.5 and a second-round score of 86, which totaled 172.5 for their efforts, only one half-point behind the winner.

Third in the ribbons riding out of Southern Pines, North Carolina was Harold Chopping. Chopping and Caramo, owned by Caroline Russell Howe, were awarded scores of 85, improving to an 86 in the second round, for a total of 171.

Rounding out the top five was Melissa Feller of Lincoln Park, New Jersey aboard Serafino, owned by Elisabeth McFadden. Feller and Serafino earned a first-round score of 83.5 and an improved second-round score of 84 for a total of 167.5 for fifth place.

Riders had another chance to show in the ring where the best of the best have competed, Ocala Horse Properties Stadium, in Saturday’s $1,500 Platinum Performance Hunter Prix.

Roanoke, Virginia equestrian Elizabeth Bailey and her own Acido 7 took home the blue in the $1,500 Platinum Performance Hunter Prix. Bailey and Acido 7 were the team to beat out of the 12 returning horses and riders in the two-round classic. They earned a second-round score of 84, which combined with their first-round score of 83, gave them a total of 167 for the win.

Echo, owned and ridden by Skyler Fields of Wellesley, Massachusetts, earned second place. Their first-round score of 85 and second-round score of 74 awarded them an overall total of 159.

Cynthia Boudreau of Hingham, Massachusetts and Church Road came in third place with scores of 79 and 78, for a total of 157 to seal their spot in the ribbons.

Coming in just behind Boudreau in fourth place was another Massachusetts equestrian Corinne Milbury of Boston aboard Parker, owned by Saddle Ridge, LLC.

Jess Lusty of York, Maine rounded out the top five aboard Anucci. They earned a first-round score of 80, which combined with their second-round score of 73, gave them a total of 173 for fifth place.