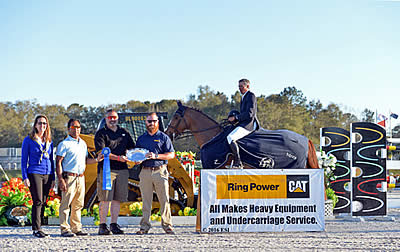 In an exciting ten-horse jump-off, Harold Chopping from Southern Pines, North Carolina, riding Basje, owned by Kendra Bullington, scored the win in Sunday’s $50,000 Ring Power Grand Prix in Ocala Horse Properties Stadium, by out-galloping and turning the strong competition. Less than four-tenths of a second separated the top four contestants in a nail-biter of a jump-off that had spectators on the edge of their seats.

A group of forty-four prestigious competitors challenged the 15-effort 1.50-meter course designed by Bernardo Cabral from Lisbon, Portugal. The first round course included a difficult triple combination and a double, but ten still managed to jump clear first rounds.

The jump off started with a gallop away from the in-gate, included a rollback to a triple bar followed by a vertical, and a gallop between jumps to the two final oxers, with several turn and striding options for the route. Five of the ten in the jump-off managed double clears with mere fractions of a second separating the top four.

First to go in the jump-off was Christoph Schroeder of Wellington, Florida riding his own Catungee. Schroeder set a blistering pace right out of the box knowing that nine fast horses followed him. He jumped clear and set the Great American Time to beat of 37.808 that held on through the next five challengers and landed him in second place when the class was done.

Following Schroeder was owner and rider Christi Israel of Ocala aboard Clouseau. They had two rails for eight faults and a time of 40.263 to finish tenth. Isabelle LaPierre of Levis, Quebec came next to contest the shortened course riding Cescha M. They gave Schroeder a run for the money, finishing in a fault-free 38.00. She stepped into the temporary second place and would eventually take home fourth.

Next up was Andre Thieme of Plau Am See, Germany riding his horse, Conthendrix. Their time of 37.882 edged out La Pierre to squeak into the second place spot behind Schroeder. It was good enough for a third place finish.

Devin Ryan of Long Valley, New Jersey and Liratus had four faults in 38.776 to take ninth place. Next up was Brandi Holloway of Topeka, Kansas riding Lucky Strike, owned by Hays Investment Corporation. As one of the most consistent performers this circuit, they turned in another great round, finishing as the fastest of the four-faulters to finish sixth in 33.677.

Returning to the ring next was Chopping on Basje. They stopped the clock at 37.639 to edge Schroder out of the top spot by a blink of an eye, .169 seconds to be exact. No one would beat them.

“By the time I went in the Order, the pace and the route had already been established,” said Chopping. “Some people did one less stride to the final jump; I just try to do what my horse is capable of doing – last week I got too aggressive at the end. People in front of me and after me were very strong. Basje is very quick on his own and I have to keep reminding myself not to try to be fast for him.”

Both Tracy Fenney riding MTM Reve Du Paradis and Manuel Torres riding Christofolini H had the times to beat Chopping, but each had four faults to finish seventh and eighth, respectively.

The final rider to jump off was Sharn Woodley of Ocala, Florida riding Barnetta for the Skye Group. He opted for a safe, clear track to finish in fifth.

“He has been brilliant this circuit and always jumps in textbook form,” said Chopping of Basje. “This is our first Grand Prix win this season, but he has been second and in the ribbons multiple times. I feel lucky to be riding him for Kendra; she has owned him since he was a seven-year-old. Now he is ten and really coming in to his own.”

Both Jared Petersen of Archer, Florida and Brian Moggre of Flower Mound, Texas had two in the top six placings. Petersen was first with Titus 2:11 and sixth with Cornerstone. Both are owned by Jared’s father Derek Petersen. Moggre was second on MTM Flutterby and fifth with MTM Ace of Spades, both owned by Major Wager, LLC.

Six horses jumped clean first rounds over a 1.45-meter course designed by Bernardo Cabral of Lisbon, Portugal. The first-round course looped around the stadium and across the diagonal to a triple combination before rolling back to finish with a double. The jump-off started at the far end over a triple bar, rolling back over the C element of the triple and included a double combination and a final oxer not jumped in the first round.

First to jump-off was Petersen on Cornerstone. They had four faults at the combination in the jump-off in a time of 33.962. That would be good for the eventual sixth place.

“The course was fairly technical for our horses that have such big strides, because it had a lot of tight lines,” said Petersen.

Following Petersen to jump-off was Brian Moggre and MTM Flutterby. The chestnut mare, bred by Tracey Fenney, has been the one to beat in the classic week after week, with two $7,500 U-Dump Junior/Amateur-Owner Jumper Classic victories so far. They raced to the finish, crossing the timers in 32.278, setting the Great American Time to Beat. They would end up second when the class was done.

Next to contend the shortened course was Carolina Ramelli Barrera of Medelin, Colombia and her own Zoran de Saulieu. They clocked in at a fault-free 33.048, just a hair behind Moggre, earning the ultimate third place.

Elisa Uribe Gutierrez also of Medelin, riding Havana De La Lande, finished clear in 33.528, giving her a fourth place finish, and Moggre on MTM Ace of Spades finished in 33.636 with no faults for fifth place.

Last, but certainly not least, to go in the jump-off was Petersen and Titus 2:11. Petersen showed that he learned from his first ride in the jump-off. The big bay galloped through the timers in 31.368 to capture the lead and take home the blue ribbon.

“Going last in the jump-off, we knew we had to go for it because Brian [Moggre] was really fast,” said owner Derek Petersen. “It really helped to have Cornerstone go first because their strides are so similar. Jared just tried to ride it as smooth as he could, and his bigger stride using the same track was just enough for the win. We were really happy with Titus’ performance today; he is just starting to come back to form after six months of rest.”

Portugal’s Bernardo Cabral designed the .90-meter course, which was run with an immediate jump-off. Sixteen riders jumped clear first rounds and fourteen jumped clear in the jump-off so time became the winning factor.

Manubay and Okla Homa went third in the jump-off and set the Great American Time to Beat at 32.642 seconds, which held on throughout the class for the win.

“I went very early in the class, so I planned to go neat everywhere with a little speed. My horse felt great this morning so we were able to stick with the plan,” said Manubay. “I am very fortunate that my time held up. There were some very quick horses that went after me. We did an inside turn from 1 to 2 and everyone pretty much took the same track but my horse is quick across the ground, so we could save a little time in certain spots.”

Katie Holt of Melborne Beach, Florida, riding Charmeur D’Uno V, owned by Whisper Group, Inc., jumped into second place with only three left to go in a time of 33.529.

The final horse to test the shortened course was True Contender, owned and ridden by Colby Hernandez of Morriston, Florida. Their time of 33.530 earned them third place.