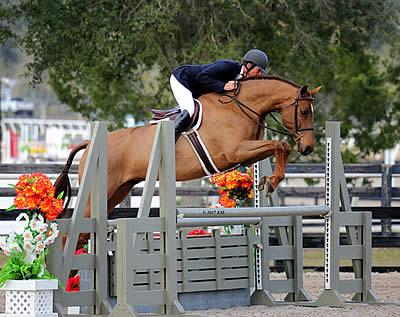 Ocala, FL (February 8, 2017): Horses and riders descended on HITS Post Time Farm for a shot at winning the $5,000 Devoucoux Hunter Prix or the $1,500 Platinum Performance Hunter Prix. It was the third week of competition at HITS Ocala and riders were hungry to place atop the best of the best.

Hunt Tosh of Alpharetta, Georgia grabbed his second win in the Devoucoux Hunter Prix of the 2017 HITS Ocala Winter Circuit. Last week, Tosh won the class aboard Gotham, owned by Dr. Betsee Parker, in addition to a third place prize with Wiser, owned by Ceil and Kenny Wheeler.

This week, Tosh claimed the victory with Casanova, another winning ride owned by Dr. Betsee Parker. They won the class with scores of 86 and 89 for a total of 175. Tosh would claim another ribbon with Wiser, this week in sixth place.

Second in the ribbons went to Amanda Steege of Bedminster, New Jersey riding Loxley, owned by Finale Partners, LLC. They were awarded a first-round score of 87 and a second-round score of 85 for a total of 172. Steege also took home fifth place with Zidane, owned by Susan Darragh.

Fourth place was Caitlyn Shiels of Hampshire, Illinois riding Cassius, owned by Don Stewart. They earned scores of 84 and to secure a total of 167.

A supremely talented crop of riders turned out to challenge the course and prove who the ultimate in hunter style was.

Melissa Marshall of Bellefonte, Pennsylvania won aboard her own mount, Valiant. The pair received eighth place in the Platinum Performance Hunter Prix during Week II and they jumped their way up the standings to claim the blue ribbon victory in Week III.

Marshall and Valiant took the lead in the first round with a score of 83; combined by a second-round score of 79, they brought the win home with a total of 162.

The second-place prize belonged to Lauren Lindner of Warren, New Jersey and Quantonius, owned by Nicole Peterson. They earned a 79 in the first round, improving to an 81 in the second round to total 160.

Williston, Florida equestrian Samantha Perlman piloted Willow Bay, owned by Ann Cohen Farm, to the fourth place ribbon. The earned a total of 159, combined by scores of 80 and 79, settling them just behind Lindner.

Fifth place belonged to Grafite, owned and ridden by Madison Pan-kita. Their scores of 80 and 77.5 earned them a total of 157.5 to round out the top five.