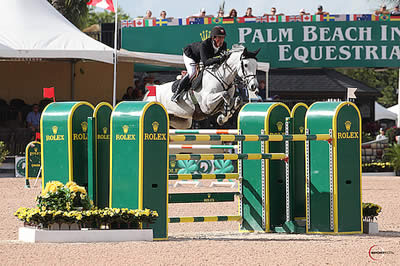 Peter Lombardo Leaves His Mark on WEF 2015 with Hunter Tricolors

Watch Nick Dello Joio and Contiki in their winning round!

The tenth week of WEF competition, sponsored by Horseware Ireland, runs March 11-15. The highlight event of the week is the $127,000 Horseware Ireland Grand Prix CSI 3* on Saturday, March 14, which will be live streamed at this link – http://bit.ly/18EqpLH. Other features include the $34,000 1.45m FEI world ranking class on Friday and the $34,000 Suncast® 1.50m Championship Jumper Classic on Sunday, also live streamed here – http://bit.ly/1wZSYz4.

Michel Vaillancourt (USA) set the course for 83 entries in Thursday’s tenth round of WEF Challenge Cup competition. He saw 12 clear rounds, and 10 returned for the jump-off where only three were able to clear the short course without fault.

Meagan Nusz (USA) and Amalaya Investments’ Sri Aladdin were first to clear the jump-off in 41.88 seconds to finish third. Farrington and Blue Angel upped the pace in 38.56 seconds, but eventually settled for second. Last to go, Dello Joio and Contiki completed the winning time of 38.47 seconds. Andres Rodriguez (VEN) and Arao Enterprises LLC’s Caballito had the fastest time in 37.10 seconds, but one rail put the pair in fourth place.

“It was nice to go last in both rounds,” Dello Joio pointed out. “I was able to watch the first one go in the jump-off and then my Dad was able to watch Kent go on the screen and kind of gave me a plan. We stuck to it and luckily it paid off today.”

“That horse is a bit of his own way. There is not really a lead change or great rideability. He is very good at going fast though. His natural gait is just to want to go and he is super careful, so fast and careful is a good combination when you are in a jump-off,” Dello Joio remarked. “Contiki doesn’t spend much time in the air. He lands and he goes; it’s not like he lands and you have to create. What is hard for me, where I probably lost a few seconds with that horse, is the turns. He is not one to just turn back on a jump. He doesn’t really allow you to do that with his rideability yet, so I probably just covered more ground faster. I was not as tidy as Kent probably was, but Contiki has a huge stride and when you let him go, he is a really quick horse.”

Contiki is a nine-year-old Swedish Warmblood gelding (Contendro x Calido I). Dello Joio began riding him before the 2014 WEF circuit and explained that the horse has come a long way since then.

“That horse last year was doing the medium schooling jumpers here, and we were having trouble,” Dello Joio stated. “We didn’t know what we had, but as the summer progressed he got better. Spruce Meadows is where he really started to shine. He started in the 1.30m and ended up in the main ring in the 1.45m the last week getting ribbons. Then he won two grand prixs in eastern Canada and a grand prix or two in Tryon. He has been a little weapon for me. He has been great, and nobody would have thought that. Nobody wanted him. He is a bit of an oddity.”

“He doesn’t do lead changes, he is tough to ride, and he spooks at everything,” the rider continued. “You just wouldn’t think he was a grand prix winner when you sat on him. This time last year we were ready to give up on the horse, but now he is my favorite. He is just a little winner.”

Commenting on his very first WEF Challenge Cup victory, Dello Joio acknowledged, “It feels great to win. It is a tough class to win, especially today. This course was really hard. I thought it was quite technical, but luckily we pulled it off today.”

In addition to the winning portion of prize money, Dello Joio was awarded the $3,000 SSG Gloves “Go Clean for the Green” bonus. Each week of the WEF Challenge Cup Series, a $3,000 bonus will be awarded to the winning rider if they are wearing SSG ‘Digital’ Riding Gloves in all rounds of competition with the SSG logo clearly visible.

Peter Lombardo Leaves His Mark on WEF 2015 with Hunter Tricolors

Peter Lombardo may have still been jet lagged after a cross-country trip to Wellington last week, but it didn’t stop him from jumping Academy Award, owned by Mary Katherine Dick, to a Shapley Grooming Products Regular Conformation Hunter Championship during WEF 9 and clinching the Week 10 honor again today.

Highlighted by blue ribbons in the stake and over fences with the eight-year-old Danish Warmblood gelding, Lombardo also took home second in the model, fourth over fences and sixth in the handy for the division championship. Hailing from Wilton, CT, Lombardo made his way to California in 2000 to work for West Coast trainer Archie Cox before opening his own Frontier Farms in Moorpark, California in 2009. A regular winner at HITS Thermal during the winter months, Lombardo flew six hunters to WEF for two weeks of Florida competition this year.

“The horses really benefit from something new,” he said about the change in scenery. “I grew up on the East Coast and we come for Devon and the indoor shows, but this is my first time ever showing at WEF and it’s been lovely. The horses went so nicely – it’s a special show and they reacted by giving their best. It takes a lot of planning and is a huge undertaking to fly these horses across the country, but it is really is nice to show in different places.”

First-time jitters were nowhere in sight for Lombardo and Academy Award, USEF Regular Conformation Horse of the Year in 2014, who also shows with Dick in the Junior Hunters. During WEF 9, Dick was Champion with her gelding and picked up the High Point owner/rider award after only purchasing him a few months ago in December.

“Round for round, he is always really good,” said Lombardo who brought Academy Award to his barn two years ago as a Green Conformation Hunter. “He’s a very glamorous horse and a great animal. I was really lucky to come across him.”

Lombardo was also Reserve Champion aboard Janie Andrew’s Ante Up with a win in the handy, third in the stake, sixth under saddle, and second and third over fences. “He’s a campaigner that we’ve have for a long time,” he said of the 13-year-old Hanoverian gelding. “He does the amateurs with Janie and has had big wins on both the East and West Coasts.”