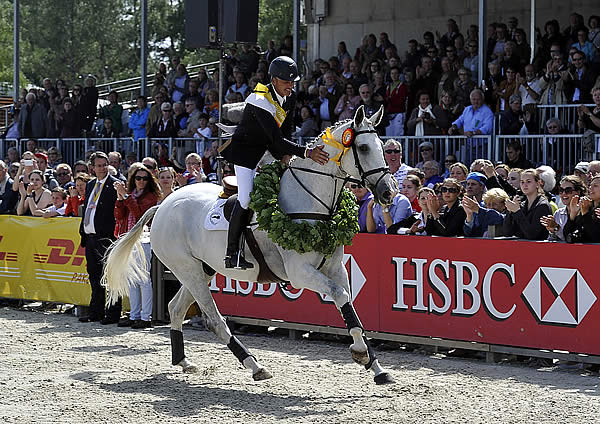 Lausanne (SUI), 16 June 2013 – There were emotional scenes when Andrew Nicholson and Mr Cruise Control triumphed at Luhmühlen, presented by DHL Paket, the penultimate leg of the HSBC FEI Classics.

It was the 51-year-old New Zealander’s fourth CCI4* victory in a year, but the first for his long-time loyal owners, Robin and Nicky Salmon, who have often seen their striking-looking grey gelding come close to major honours without ever taking the big prize.

“He’s a big horse that’s taken time but he’s kept improving through all his training, and that means that out of all my four-star wins this one is particularly rewarding,” said the invincible Nicholson, who has now won four of the world’s six CCI4*s.

Zara Phillips (GBR), who finished second on Trevor Hemmings’ High Kingdom, put pressure on Nicholson right until the end with a beautifully ridden clear Jumping round.

However, the six-time Olympian rose to the occasion magnificently, just rattling the second fence but soaring over the rest to finish on his Dressage score of 38.0.

“He was too ice-cool,” Phillips smiled sportingly. “Thank goodness he can’t ride at the Europeans!”

Phillips was clearly thrilled by the continuing improvement shown by her Olympic team silver medallist. “He’s getting better all the time,” she said.

Both the two leading horses are Irish-bred: Mr Cruise Control is by the great jumping sire Cruising and High Kingdom is by Master Imp.

In contrast, William Fox-Pitt’s two horses, which rose to third and fourth places with immaculate clear rounds, are both from continental stock. Neuf des Coeurs, third, is a smart Selle Francais by Nidor Platier, and Lionheart, fourth, is a majestic German-bred by Lancer lll. Neuf des Coeurs missed much of last season through injury and Lionheart, one of the best jumpers on the circuit, is clearly back to his best after inexplicably tiring on the Olympic Cross Country last year.

“It’s been a happy weekend,” said Fox-Pitt, who has now overtaken Jock Paget (NZL) in the HSBC FEI Classics to lie second on the leaderboard behind Nicholson. “It was great to have both horses jumping and galloping so well and I couldn’t be more pleased.”

Kevin McNab (AUS) had modestly predicted that he wouldn’t be making either Nicholson or Phillips too nervous in the final phase, but he only had one rail down on Clifton Pinot, slipping from overnight third to fifth place.

Fellow Australian, Andrew Hoy, who had been in fourth after Cross Country with Rutherglen, did not present the 10-year-old at this morning’s horse inspection.

The winner, Nicholson, again proved his skills with a top-10 finish on his catch ride, Rathmoyle King. He hit two rails on the 15-year-old grey, but that wasn’t enough to drop him in the final placings and he held onto sixth. With just Burghley to come in the HSBC FEI Classics, it seems that 2013 is going to be Nicholson’s year.

Andrew Nicholson (NZL), 51, who currently heads both the HSBC Rankings and the HSBC FEI Classics, is acknowledged as one of the most hard-working and naturally talented horsemen in Eventing. He first came to England as an 18-year-old in 1979 and worked with racehorses.

His first CCI4* was Badminton in 1984 where he earned a place on the first New Zealand Olympic team, at Los Angeles. He has since ridden at five more Olympic Games, winning team silver in 1992 and team bronzes in 1996 and 2012, when he finished fourth individually on Nereo. He also won team gold at the 1990 FEI World Equestrian Games in Stockholm (SWE) and team and individual bronze on Nereo at the 2010 Alltech FEI World Equestrian Games in Kentucky (USA).

This is his sixth CCI4* win, following three Burghley victories, in 1995 on Buckley Province, in 2000 on Mr Smiffy, and in 2012 on Avebury, plus Pau in 2012 on Nereo and Kentucky this year with Quimbo. Last year, he finished second in the 2011-2012 HSBC FEI Classics and won the HSBC Rider Rankings.