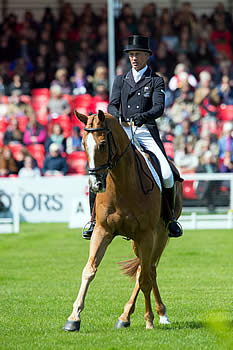 Andrew Nicholson (NZL) and Nereo take a commanding lead after the first day of Dressage at the Mitsubishi Motors Badminton Horse Trials, fourth leg of the FEI Classics™ 2014/2015. (Jon Stroud/FEI)

Lausanne (SUI), 7 May 2015 – Andrew Nicholson (NZL) and Libby Sellar’s Nereo produced the best test of their long and illustrious career together to take the lead after the first day of Dressage at the Mitsubishi Motors Badminton Horse Trials, fourth leg of the FEI Classics™ 2014/2015.

The youngest rider in the field, 20-year-old Niklas Bschorer (GER), who wasn’t even born when Nicholson’s Badminton career began in 1984, has made a stunning debut and is in third place on Tom Tom Go 3 with a mark of 42.1.

Flora Harris (GBR), a member of Britain’s World Class Performance Potential squad, is best of the home side in fourth place on the grey mare Amazing Vlll on 43.6, just ahead of four-time winner Sir Mark Todd (NZL) on the German-bred Leonidas ll, fifth. Pippa Funnell (GBR) is currently in sixth place on the upstanding chestnut Redesigned.

Nicholson’s empathetic 11-year partnership with the 15-year-old Nereo is one of the most enduring in the sport; the Spanish-bred chestnut gelding by the Thoroughbred Fines is something of a “one-man horse” and a shy, polite character, “but is always on your side.”

“It’s the smoothest test he’s done,” said Nicholson. “He let me be quite bold on him and I just think today the test flowed more smoothly.

“Obviously it’s a major factor coming there with a horse I understand so fully and that’s a satisfying achievement in itself. He likes to work with you, and you know that he will go in the arena and not look around and will give you 100 per cent.”

Nicholson, 53, has won eight CCI4*s, including Pau in 2012 on Nereo, but victory at Badminton has, frustratingly, eluded him – the closest he came was second place on Lord Killinghurst in 2004 and third in 2013 on Nereo. “All my focus is on this,” he promised.

Paget has been competing the 17-year-old NZ Thoroughbred Clifton Promise for eight years, and he agreed: “You do all the work, you train, train, train, and it is nice when you go in there and they do it for you. Every foot went where I wanted; he was a pleasure to ride.”

Bschorer, who moved to England aged 16 to work with the German team trainer Christopher Bartle at his Yorkshire Riding Centre, did not appear to be at all fazed by being in the limelight at his first Badminton.

After walking the Cross Country with Bartle and his trainer Sir Mark Todd, the young rider pronounced Giuseppe della Chiesa’s (ITA) track to be: “More inviting than last year and very do-able.” He said that his mount, a 12-year-old Holsteiner, “is a very good jumper and has lots of scope.”

But before attention turns to Saturday’s excitements, there is plenty to look forward to tomorrow. Today’s top-placed riders may well be challenged by leading German riders Bettina Hoy on Designer 10 and Ingrid Klimke on her Pau winner Horseware Hale Bob, while the home side boasts 2014 runner-up Oliver Townend (GBR) on Armada, triple winner Pippa Funnell on her other ride, Second Supreme, and William Fox-Pitt on the impressive stallion Chilli Morning.