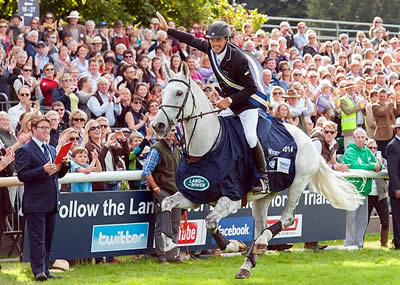 Lausanne (SUI), 7 September 2014 – There was a fairytale ending to the Land Rover Burghley Horse Trials when New Zealander Andrew Nicholson (NZL) and his delightful grey gelding Avebury made history with a third successive victory at this always challenging British CCI4*.

The legendary New Zealander also sprang into a bonus fourth place in the FEI Classics™, although William Fox-Pitt’s (GBR) position at the head of the leaderboard never looked in doubt. His fourth place at Burghley with a beautiful clear Jumping round on Bay My Hero was enough to clinch the title for the fourth time since the series began in 2008.

When Sam Griffiths (AUS) and Happy Times hit two fences to drop a place to third and Oliver Townend dropped from overnight third to eighth with an unfortunate four rails down on Armada, Nicholson was left a two-rail breathing space over Jock Paget (NZL) and Clifton Promise who had jumped an immaculate clear that was to bring them up into the runner-up spot.

However, Mark and Rosemary Barlow’s intelligent grey seemed to know exactly what he had to do, and Nicholson coolly kept him in the perfect outline and rhythm to jump clear for just two time faults.

“I can assure you that I didn’t feel that cool!” said Nicholson, who admitted to feeling the strain. “He’s a good jumper but I knew I’d got to keep calm and confident. It was tempting to speed up at the last two fences, because I knew I was heading for time faults, but I decided to stay in a rhythm because I really wanted to win with a clear round.”

He added: “This isn’t just about me; it’s about the team at home – I’m just lucky enough to ride the horse. I’ve had a bad year – I shouldn’t have fallen off at Badminton and then I really wanted to win a medal in Normandy and didn’t – so I’ve put myself under a lot of pressure. Winning this means an awful lot.”

Three horses were withdrawn before the Jumping phase including, unfortunately, Hannah Sue Burnett’s Harbour Pilot, from seventh place, and one was eliminated at the final Horse Inspection, first-timer Roo Fox’s (GBR) Fleet Street.

There were 14 clear Jumping rounds from the 38 finishers, with Australia’s Murray Lampard finishing best of the 17 first-timers in 10th place on Under the Clocks. Gemma Tattersall, a stalwart member of Britain’s FEI Nations Cup™ squad, was the second best of the home side, rising 22 places after Dressage to finish fifth on Arctic Soul.

The Badminton winner Sam Griffiths, who has been established in Britain for many years and was competing in his eighth CCI4* on the 15-year-old Happy Times, finished second in the FEI Classics™ from Oliver Townend, the 2009 winner, who slipped a place to third. Tim Price (NZL), the Luhmühlen winner, hung on for fifth place behind Andrew Nicholson, just edging out the Adelaide winner Christopher Burton (AUS).

“It was fantastic to win again,” said Fox-Pitt. “It’s all down to my horses. Seacookie got it off to a great start at Pau last year and Bay My Hero was brilliant at Kentucky. But then I had a fall at Badminton and withdrew Cool Mountain at Luhmuehlen and it was all looking a bit patchy. The FEI Classics™ is a great addition to our sport.”

Andrew Nicholson (NZL), 53, has long been acknowledged as one of the most hard-working and naturally talented horsemen in Eventing. The current world number two first came to England 34 years ago as a 19-year-old to work with racehorses. His first CCI4* was Badminton in 1984 where he earned a place on the first ever New Zealand Olympic team, at Los Angeles.

He went on to ride at five more Olympic Games, winning team silver in 1992 and team bronzes in 1996 and 2012, where he finished fourth individually on Nereo. He also won team gold at the FEI World Equestrian Games™ 1990 on another horse owned by Rosemary Barlow, Spinning Rhombus.

Andrew has won numerous CCIs – this is his fifth Burghley win, and his third in a row on Avebury, following victories in 1995 on Buckley Province and 2000 on Mr Smiffy. He has also won three other CCI4*s: Pau in 2012 on Nereo, Kentucky in 2013 on Quimbo and Luhmuehlen in 2013 on Mr Cruise Control.

Andrew is married to Wiggy, who rode Avebury as a novice; he has two adult daughters, Rebecca and Melissa, and two young children, Lily and Zach. They live near Marlborough, Wiltshire.

About the winning horse

Andrew Nicholson bred the 14-year-old Avebury from Jumbo, a stallion he competed to CCI3* level, and a racing-bred thoroughbred mare Memento (formerly Bairn Free). Avebury is named after ancient earthworks near the Nicholsons’ home. He is the only horse in history to win a CCI4* three times in a row – Kimberly Severson’s Winsome Adante has won Kentucky three times, though not consecutively – and only the second CCI4* winner bred by the rider (following Mary King’s Kings Temptress, winner of Kentucky in 2011).

About the FEI Classics™ winner

He has also represented Britain 18 times in championships, most recently winning world team silver and individual bronze on Chilli Morning last weekend at the Alltech FEI World Equestrian Games™ 2014 in Normandy (FRA). His medal tally includes Olympic silver (2004 and 2012) and bronze (2008), world team gold and individual silver on Cool Mountain (2010) plus team silver in 2006 and team bronze in 2002. He has six European team gold medals, one team bronze, two individual silvers (1997 and 2005) and individual bronze last year on Chilli Morning.

Fox-Pitt is married to Alice, a television racing commentator. They live near Sturminster Newton, Dorset, and have two sons, Oliver and Thomas, a daughter Chloe and another baby due this month.