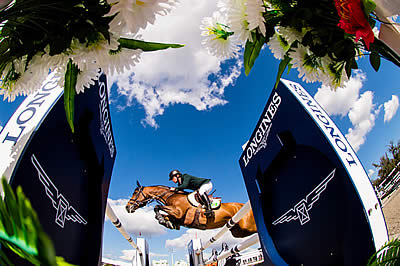 Like the annual gathering of the clans, Jumping riders from all around the globe are descending on the beautiful city of Barcelona in Spain for this week’s Longines FEI Jumping Nations Cup™ Final 2018. For the sixth year in succession, this celebration of all that’s best in team sport takes place in the quietly sophisticated surroundings of the Real Club de Polo, venue for Jumping at the 1992 Olympic Games.

But coming just two weeks after the FEI World Equestrian Games™ (WEG) in Tryon, there’s an extra edge to it this time around. There are points to be made, scores to be settled, and muscles to be flexed, especially for the countries that had high hopes going to the USA last month only to have them dashed when the pendulum of sporting fortune didn’t swing in their direction.

The defending Longines FEI Jumping Nations Cup™ champions from The Netherlands didn’t make it onto the Tryon podium but they did manage to claim one of the six qualifying spots for the Tokyo 2020 Olympic Games. And Chef d’Equipe Rob Ehrens clearly means business again this week, bringing three of his Tryon team – Marc Houtzager, Frank Schuttert, and World No. 1, Harrie Smolders – along with Leopold van Asten and Maikel van der Vleuten.

The Swiss looked set to carry off WEG gold but had to settle for fifth in the final analysis, although the individual silver and bronze medals collected by Martin Fuchs and Steve Guerdat demonstrated their super strength and commitment.

Guerdat’s loyalty to the Nations Cup format is second to none, and the London 2012 individual champion will be back in the ring this weekend giving it everything he’s got along with Paul Estermann, Bryan Balsiger, Arthur Gustavo, and Barbara Schneiper. We won’t be seeing the newly-crowned individual world champion Simone Blum, but her Chef d’Equipe, Otto Becker, will be keen to follow up WEG team bronze with a strong result from another formidable German side that includes Hans-Dieter Dreher, Marcus Ehning, Maurice Tebbel, Andre Thieme and Philipp Weishaupt.

And the Irish will be there. The reigning European Champions missed out on a ticket to Tokyo when finishing seventh at the WEG – “We will be trying to try to erase the bad taste that our result in Tryon has left,” said team manager Rodrigo Pessoa, after confirming his selection of Shane Breen, Anthony Condon, Darragh Kenny, Billy Twomey, and Michael G Duffy last week.

The real tension may well be between the Americans and Swedes. It took an edge-of-the-seat jump-off to separate them in the battle for world championship gold, and it would be very sweet revenge if the Swedes could turn the tables this time out.

So Henrik Ankarcrona has selected Jonna Ekberg, Peder Fredrison, Stephanie Holmen, Irma Karlsson, and Erica Swartz who will be on a mission. American confidence should be at an all-time high, however, and although Laura Kraut is the only member of that gold-medal-winning Tryon team to be called up again this week, she and her compatriots Lucy Deslauriers, Alex Granato, Andrew Kocher, and Jessica Springsteen should have an extra spring in their step.

A total of 15 nations – Austria, Belgium, Brazil, Canada, France, Germany, Great Britain, Ireland, Italy, Netherlands, Spain, Sweden, Switzerland, UAE, and USA – will line out when the first round of the Final gets underway at 20.00 local time on Friday evening. Teams go in order of the draw that takes place Thursday evening, and only the top eight nations will qualify for the series title decider on Sunday afternoon.

The remaining sides will compete in Saturday night’s Challenge Cup, and with €1,700,000 in prize money on offer, it promises to be a superb weekend of sport. It will be another interesting one for America’s Lucy Deslauriers as the 19-year-old will compete against her father, Mario Deslauriers, who will line out for Team Canada and who was just 19 years old himself when setting a record, that still stands, as the youngest ever rider to win the coveted Longines FEI World Cup™ Jumping trophy back in 1984.

Following an agreement announced last year, Longines became the brand new long-term title partner of the FEI Jumping Nations Cup™ series, and after 13 qualifiers on three continents, this 109th season of Nations Cup Jumping is coming to a thrilling climax.

It’s going to be spell-binding so check out the full entry list here.