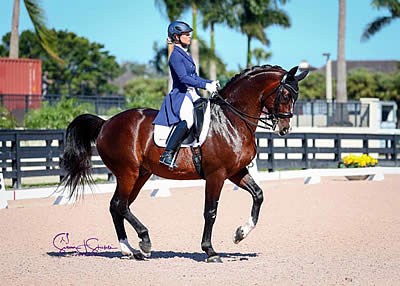 Kane, of Diamante Farms, said: “He had some time off over the summer and this was his second show back this year. I wanted to use the opportunity to get him more solid before stepping back into CDIs in two weeks’ time. It was a busy show with a lot going on, especially with the jumpers on the Derby field, so it was a great opportunity to test Galanto’s focus.”

She was delighted with how the stallion, which came from a small barn in Germany on Valentine’s Day three years ago, coped with the atmosphere.

“Everything felt great — we had a little miscommunication in the one-tempis, but the piaffe/passage was stronger than ever. I had his focus and attention, plus energy that I could use to my benefit. He has such softness, but you have so much power available all the time; it’s quite a fabulous feeling.”

Kevin Kohmann, who is German but also based at Diamante Farms, won Friday’s prix st georges on Melanie Pai’s 16-year-old Hanoverian gelding Fritz San Tino with a fantastic score of 74.853%.

Denmark’s Signe Kirk Kristiansen picked up two blue grand prix special ribbons on the talented Her Highness O, a 15-year-old Hanoverian mare by Hohenstein x Weltmeyer. Kristiansen bought the mare from Caroline Roffman three years ago, but an injury to a hind leg shortly thereafter appeared to be career threatening.

“I’ve had her for three years, but it was two years before the first show because of the injury,” said Kristiansen. “I gave up ever riding ‘Hannah’ ever again and tried breeding her, but we didn’t succeed. Then she came sound, and now she’s happy and fit.”

Kristiansen, who is based in Palm Beach Point for the season and home in Denmark over the summer added: “We got our best score [68.51%] this week. In the past we’ve had a problem with the piaffe at X where she spooked every time, but now she’s settling really well with that. I’m so honored to ride her; I didn’t educate her myself and I feel very lucky to have a horse like her who is older and wiser. She’s energetic but feels safe, which for me is the perfect combination as I’m not so brave, but I love her energy. I am learning so much.”

Lisa Wilcox was unbeaten in two starts on the chestnut stallion Gallant Reflection HU, by Galant Du Serein x Rhodiamant. They won the intermediate II with over 71% before logging 68.375% in the developing grand prix class — an impressive feat for a horse who is only nine years old. He is owned by Horses Unlimited, who bred the licensed stallion.

“We spent a year working on his piaffe/passage after the developing prix st georges championship and I’m thrilled with his progress,” said the Olympic rider who has ridden ‘Reef’ since he was five. “The plan is to let him do the national championships this season, then graduate to CDIs at grand prix next year. Our goal long-term is Tokyo. Reef is amazing and has so much potential, I really love him. He’s incredibly smart and talks to me — he whinnies when he sees my car. He has a lot of talent and is a ton of fun.”

Betsy Steiner was a double small tour winner on Swiss W, Whitney Bailey’s 11-year-old mare by Sir Oldenburg, topping both the prix st georges and I-I classes they entered with over 71% — more than 4% clear of the chasing pack in both.

Steiner, who is based at White Fences Equestrian Center with her daughter Jessie, said: “Swiss is extraordinary. She’s the love of my life. She’s very sensitive and can be hot, but in a positive, workmanlike way that you can turn into brilliance. She’s so intelligent that she’s made me into a better rider and trainer by showing me new and better ways to do things. If there are ever mistakes in our tests, they’re mine.”

The mare’s FEI passport is yet to arrive, but once it does, Steiner plans to launch her small tour CDI career.

“We’re also working on a very exciting new I-1 freestyle for her with Terry Gallo [who also does Laura Graves’ music],” she added.