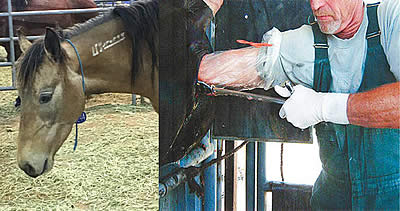 The Bureau of Land Management is once again callously planning to permanently sterilize wild horse mares using a gruesome procedure so deadly and inhumane that many veterinarians refuse to perform it. Don’t let the BLM rip out the ovaries of wild mares!

The proposed surgery, called ovariectomy via colpotomy, is controversial even for domestic mares who are used to human handling and given normal surgical protections such as sterile conditions, anesthesia, and complete long-term aftercare. The situation at the Burns Corral in Oregon, where the deadly experiments are slated to take place, is not conducive to any of those conditions which makes the already risky procedure all the more dangerous and life-threatening.

This is the third time that the Bureau has tried to perform this barbaric experiment on defenseless wild horse mares, under the guise of a “study.” After two major universities dropped out, lawsuits were filed, and massive public outcry occurred, the first two attempts were abandoned by the Bureau. Many thousands of In Defense of Animals supporters wrote to both of the universities initially involved, and also to the BLM in protest of this vile procedure from its past attempts.

Take action on this issue.