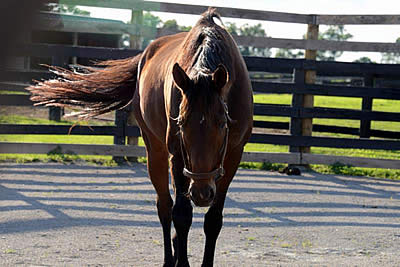 According to Park’s attending veterinarian, Dr. Bryan Waldridge, the cause of death was complications of duodenitis/proximal jejunitis (anterior enteritis).

“This is a small intestinal colic characterized by inactivity of the small intestine and large amounts of reflux from the stomach,” said Dr. Waldridge.

A full necropsy report is pending.

The 9-year-old gelded son of Macho Uno had been pensioned at Old Friends, the Thoroughbred Retirement facility in Georgetown, KY, since last April.

Bred in Ontario by Adena Springs, Private Zone (Macho Uno – Auburn Beauty, by Siphon (BRZ)) made his first nine starts in Panama where he became a group 1 winner.

A temperamental colt, he was purchased by former jockey Rene Douglas and was campaigned by his Good Friends partnership under several conditioners, including Doug O’Neill, Alfredo Velazquez, Jorge Navarro, and Brian Lynch.

After losing his first eight starts in North America, Private Zone went on to become a four-time grade 1 winner with his breakthrough coming in the 2013 grade 1 Vosburgh Invitational Stakes.

He counted the 2014 grade 1 Cigar Mile and 2015 grade 1 Forego Stakes among his victories.

“We were so grateful when the owners of Private Zone retired him to us, and that only increases our sadness that he died this morning,” said Old Friends President Michael Blowen. “He was a marvelous animal, and we are thankful to everyone who cared for him at Park Equine Hospital for the last two weeks trying to help him overcome this difficult illness.  Private Zone was a fighter to the end, trying to help us help him.”

Old Friends is a 501 (c) (3) non-profit organization that cares for over 175 retired racehorses. Its Dream Chase Farm, located in Georgetown, KY, is open to tourists daily by appointment. Old Friends also has a satellite facility in Greenfield Center, New York, Old Friends at Cabin Creek: The Bobby Frankel Division, which is also open to visitors. For more information on tours or to make a donation, contact the main farm at (502) 863-1775 or see their website at www.oldfriendsequine.org.