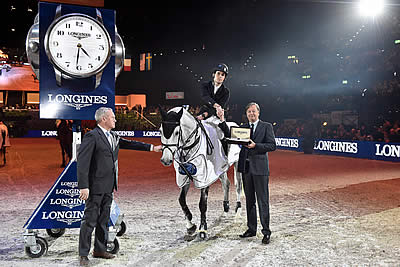 Zurich (SUI), 25 January 2015 – Spain’s Sergio Alvarez Moya and Carlo returned to top form today to win the tenth leg of the Longines FEI World Cup™ Jumping 2014/2015 Western European League series at Zurich in Switzerland. The grey gelding had not been showing his usual sparkle over the winter months, but this afternoon, with his 30-year-old rider in determined mood, he out-galloped the Irish partnership of Bertram Allen and Molly Malone by one-tenth of a second for a convincing victory.

Just seven qualified for the jump-off, and it was the Irish pair who were the ones to beat despite clears from both Sweden’s Rolf-Goran Bengtsson and Casall ASK who had to settle for third and Penelope Leprevost and Flora de Mariposa who lined up fourth. Host nation representatives, Martin Fuchs (PSG Future) and Romain Duguet (Quorida de Treho), filled fifth and sixth places, while team world champion, Maikel van der Vleuten from The Netherlands, finished seventh with VDL Groep Verdi.

The first-round course presented by Swiss designer, Gerard Lachat, was big and difficult, requiring a lot of lengthening and shortening of strides and with tall verticals all the way. Duguet was first to leave all the timber intact, and Fuchs was next, despite a massive stand-off at the final oxer with PSG Future.

Ridden off an awkward bending line, and immediately following the testing triple combination (vertical, oxer, vertical) at fence 12 which took a huge toll, the last fence proved a bogey for many of the 40 starters who arrived on a bad distance only to make their sole error there. Among its victims were The Netherlands’ Gerco Schroder with Glock’s London and World No 2, Germany’s Ludger Beerbaum riding Chaman. Allen, however, ensured he was well within the 64-second time-frame so he could provide his brilliant little 11-year-old mare with a more generous approach, while Leprevost’s lively mare also bounced home cleanly.

Bengtsson and Casall ASK made it all long quite elementary, but Moya’s first run was considerably less smooth as he admitted himself afterwards. Having successfully negotiated the two big oxers down the long side of the arena at fences seven and eight, Carlo arrived really deep to the 1.60m Longines vertical at fence eight. But he wriggled his way up and over, showing just how positive he was feeling about things today. “He tried so hard for me!” his delighted rider later said.

Duguet’s stallion was another tryer, and in the jump-off he put in a monumental effort to clear the new oxer at fence 15 from a long way off when first to go. But despite negotiating the following double successfully, the pair finished on four faults when the penultimate oxer, formerly fence six, hit the floor. And when Fuchs‘ gelding hit the first element of the double then the door was still wide open for the remaining five.

Allen and Molly set off with their usual gusto, making a supremely tight turn to the double and galloping home to record the first clear in 39.48 seconds, and that was always going to take some beating. Leprevost opted for caution, leaving all the fences in place but over five seconds slower, and Bengtsson gave it his best shot, falling short of the young Irishman’s target-time by more than a second, however.

Then Moya set off, and from the outset he looked like he meant business as did Carlo who seemed to relish the challenge with an attitude he has not shown all season. Jumping and turning seamlessly, the pair cleared the penultimate oxer and, where Allen had taken nine strides to the last, the Spanish rider urged his horse forward on eight to land fractionally ahead and seal the deal by less than a tenth of a second.

A reflective Sergio Moya said this evening, “Our poor results were not his (Carlo’s) fault for the last few months. My head was not focused on the sport as much as it should have been, but that’s changed now and we are riding together again with great confidence. When you don’t have good results you try to change things, and that isn’t always the right thing to do, so we went back to our olds ways and now we are jumping really well together again!”

Allen said, “I thought someone might beat me in the jump-off, and Sergio did one stride less to the last, but I’m happy with my result. Molly’s such a fantastic mare! I’ll give her another break, and then we’ll start getting ready for Las Vegas – it’s great to have picked up the points for the Final and I’m looking forward to it now!”

He has rocketed right up to third place on the Western European League leaderboard, shadowing only Olympic champion Steve Guerdat from Switzerland and French star Kevin Staut, while reigning Longines FEI World Cup™ Jumping champion, Germany’s Daniel Deusser, lies behind the 19-year-old Irishman in fourth. Moya has moved into 18th position, but on 31 points, and with just two remaining qualifiers left to run, he knows he has more to do if he is to make it to the Longines FEI World Cup™ Jumping 2014/2015 Final in three months’ time.

“I’ve always said that going to the Final is not one of my goals, but if I get qualified I will go,” the Spanish rider pointed out this evening. “I am still young, and the last time we went to a Final (2013) Carlo jumped really well. So we will compete in Bordeaux, and if we are close to winning and close to qualifying for Las Vegas then we will see. If not, then we will make a different plan.”

The next leg will take place at Bordeaux, France on Saturday 7 February 2015. For details of the French fixture, visit www.jumping-bordeaux.com or contact Press Officer Pascal Renauldon, Email info@rbpresse.com, Tel +33(3) 44 620 621.

40 starters, and 7 jumped clear in the first round.

Winner was 30-year-old Sergio Alvarez Moya from Spain riding Carlo, the horse with which he finished fourth at the FEI World Cup™ Jumping Final in Gothenburg, Sweden in 2013.

Runner-up was 19-year-old Bertram Allen from Ireland whose result today has ensured qualification for the Final in Las Vegas, USA in April.

10 competitors from the host nation of Switzerland.

Zurich Organising Committee made a special presentation to Irish rider, Jessica Kuerten, who competed in the final international competition of her career when taking part in the Longines FEI World Cup™ qualifier at the Swiss venue today.

Just two qualifying rounds of the Western European League are left to run – at Bordeaux, France on Saturday 7 February and at Gothenburg, Sweden on Sunday 1 March.

Sergio Alvarez Moya: “I’ve been having a bad time for a while now, not so lucky here and there with four faults all the time, but it just paid off today and I can’t be happier!”

Bertram Allen: “Today’s course was big but fair. There were a lot of faults, but no disasters.”

Irish Chef d’Equipe, Robert Splaine: “Today was a remarkable achievement for young Bertram Allen. He not only came second against the very best in the world, but also achieved enough points to ensure his qualification for the World Cup Final at Las Vegas. He is an outstanding talent and an outstanding ambassador for both his country and for the sport.”