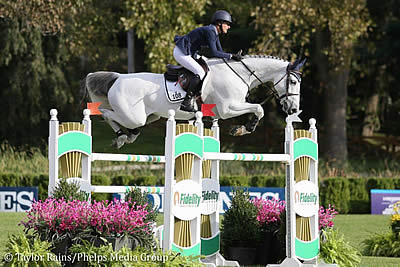 North Salem, N.Y. – Sept. 30, 2018 – The 2018 American Gold Cup at Old Salem Farm came to an end on Sunday as some of the world’s top international show jumping athletes competed for the coveted American Gold Cup trophy in the $204,000 Longines FEI Jumping World Cup™ New York CSI4*-W. The United States claimed the top prize for the third year in a row as Molly Ashe Cawley of Wellington, Florida secured the victory aboard the 10-year-old KWPN mare D’Arnita.

The large first round course utilized the field’s natural slopes and hills to test athletes over a series of 13 obstacles. Athletes collected rails all over the course, but seven combinations advanced to the jump-off after producing clear efforts in the first round.

Competing at her home base as the trainer of Old Salem Farm, Lucy Davis, who rode on the U.S. silver medal team at the 2016 Olympic Games in Rio de Janeiro, Brazil, set the standard to beat aboard Old Oak Farm’s Caracho with the first double-clear effort in 39.30 seconds. However, her early start in the order would prove to be disadvantageous with six competitive combinations still left to come behind her. Ultimately, she would claim fourth place as the slowest double-clear finisher.

Margie Engle (USA) and her veteran partner Royce, owned by Gladewinds Partners, LLC, successfully navigated the short course next, stopping the timers in a whopping 36.85 seconds to take over the lead.

Mattias Tromp (USA) followed suit, piloting Quinta, owned by Swede Ventures LLC, to another double-clear performance in 37.95 seconds to move into second place in the standings.

It all came down to the final entry of the class: Cawley and D’Arnita. It was clear the pair came to win as they fought hard to complete the eight-fence serpentine in record time. In the end, her time of 36.76 seconds narrowly secured the victory ahead of Engle by one-tenth of a second. Sunday’s achievement at the American Gold Cup is D’Arnita’s biggest career win to date and Cawley’s first time earning the prestigious title.

Thus far this year, the pair has also claimed wins in the Kubota Cup during the ‘North American’ CSI5* Tournament at Spruce Meadows in July and at the Great Lakes Equestrian Festival in August in the $35,000 Great Lakes Classic CSI3*.

Once again, Engle was forced to settle for second place, after also finishing second in Saturday’s $35,000 Hermès Sellier Classic with Indigo and in Thursday’s $35,000 Trelawny Farm Welcome Stake CSI4* with Dicas, while Tromp grabbed third place honors and Davis rounded out the top four.

In the lead-up to Sunday’s main event, McLain Ward’s beloved and legendary partner, Rothchild, owned by Sagamore Farms, was retired in a special ceremony honoring his incredible career with Ward, including winning individual gold and team bronze for Team USA at the 2015 Pan American Games in Toronto, Canada.

In addition, Engle was awarded the M. Michael Meller Style of Riding Award for exhibiting an outstanding combination of horsemanship, skill and presentation while competing at the 2018 American Gold Cup. Ralph Caristo also received the Old Salem Farm Foundation Lifetime Achievement Award, which was created by Old Salem Farm head trainer Frank Madden as a way to recognize members of the U.S. hunter/jumper community for their selfless contributions to the sport they love.

Re-live all of the action from Sunday’s grand prix at the American Gold Cup with NBC Sports Network’s broadcast of the $204,000 Longines FEI Jumping World Cup™ New York CSI4*-W on Sunday, Oct. 14, at 2 p.m.