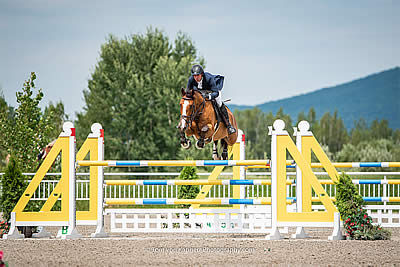 Bromont, August 3, 2019 – Andrew Kocher and Darius de W took first place in the Modified Grand Prix of the 44th edition of the International Bromont at the Bromont Olympic Equestrian Park.

FEI4* course designer Michel Vaillancourt (CAN) had prepared a difficult course for this 1.45 m class. With 13 obstacles for 16 efforts including a double combination halfway and a triple almost at the end, the Modified Grand Prix saw only five pairs make it to the jump-off, four of whom were experienced riders. That is how Andrew Kocher & Darius de W, Jonathan McCrea & Fernando H, Ali Ramsay & Bonita VH Keizershof Z & Alberto Michan & Gletscher EIS E were joined by Caroline Di Vittorio & Auburn des Rosiers.

Right from the start in the jump-off Kocher and Darius de W (Berlin x Zuera de W), an 11-year-old KWPN bay gelding owned by Eye Candy Jumpers, took the lead with a clear second round in 37.72 seconds. No other team could match their performance.