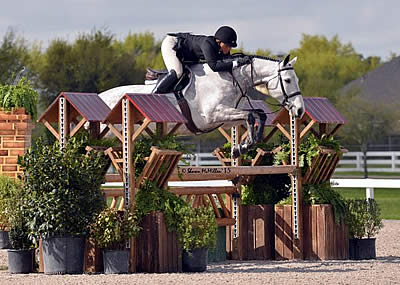 Wellington, FL – March 31, 2015 – SBS Farms had a very successful outing for the second week of the 70th Pin Oak Charity Horse Show, presented by Irish Day Farm. Miss Lucy may have only been making her second derby start since 2012, but she absolutely dominated the $30,000 USHJA International Hunter Derby, presented by Valobra Master Jewelers. Jennifer Alfano rode the 13-year-old Dutch Warmblood mare for owner Helen Lenahan to the top of the ribbons in the first round, and finished second in the handy to clinch the win.

Miss Lucy illustrated just how beautiful a hunter can be, putting in flawless trips on her way to claiming the top prize in the Derby.   In the handy, Alfano had scores of 91 and 85 with bonus points of 6 and 4 with three high options. She finished with a victory six points above Fleur De Lis Farms’ Bowie with Courtney Calcagnini, who came in second. Miss Lucy was the recipient of the Paula Sparks Perpetual Trophy, donated by William Sparks, for best turned out horse for the second week of the derby.

She helped Alfano claim the Antares Leading International Derby Award, which was awarded to the highest points earned by a same rider/horse combination from both USHJA International Derbies during week one and two. Alfano received $1,500 and an Antares saddle for her impressive rides.

Miss Lucy was also extremely successful in the High Performance division, claiming one third place and a triad of second place finishes over fences, as well as coming in second under saddle to finish as the reserve champion.

Billie Steffee’s Maggie May was twelfth in the first round of the Hunter Derby, but had an impressive move up to finish fifth in the second round. The pair of Maggie May and Alfano ended up fifth overall out of a field of 41.

Helen Lenahan’s Me Again and Alfano won two of the First Year Green Working Hunter over fences classes in impressive company. The pair claimed the top prize in the handy and sixth in the stake class out of 15 entries. This near sweep captured the division championship.

Candid was reserve champion in the Second Year Green Working Hunters, finishing with good ribbons over fences, a second in the under saddle and handy, and winning the stake class. Heartbreaker brought home good ribbons in the Low Pre-Green Hunter division.

Based out of Buffalo, NY, SBS Farms’ Susie Schoellkopf and Jennifer Alfano run one of the foremost show hunter training operations in the country, and travel nationwide to compete in the nation’s most prestigious horse shows.

Based out of Buffalo, NY, SBS Farms’ Susie Schoellkopf and Jennifer Alfano run one of the foremost show hunter training operations in the country, and travel nationwide to compete in the nation’s most prestigious horse shows. SBS Farms, Inc. continues the proud tradition of the Saddle and Bridle Club as one of the top show stables in the northeast. Schoellkopf is also the Executive Director of the Buffalo Therapeutic Riding Center, which houses both The Buffalo Equestrian Center as well as SBS Farms. Built in 1922, the 160-stall facility is a historical landmark, with its unique English Tudor and gothic style architecture.