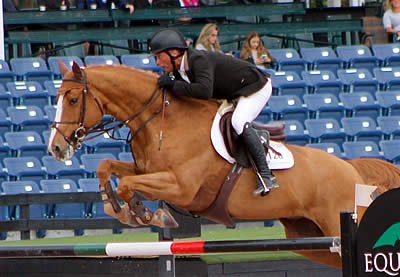 Wellington, FL (February 2, 2017) — Another week of competition at the Winter Equestrian Festival (WEF) in Wellington, Florida proved to be another week of blue ribbons for leading show jumper Todd Minikus. Minikus kicked off week three of WEF by clinching first place in the FEI $35,000 Douglas Ellian 1.45m, then continued his victory streak in the FEI Illustrated Properties $35,000 1.45m, the $200 seven-year-old Developing Jumpers, and in three hunter classes.

Minikus won the $35,000 Douglas Ellian 1.45m speed class against 46 competitors aboard 13-year-old Dutch Warmblood gelding Zephyr (by Landor S out of Tobelia), owned by Wyndmont, Inc. Minikus, the last to go in the jump-off, cleared the course to victory, crossing the timers in just 63.95 seconds. Minikus reflected, “Once I found a nice pace to number one, I just stayed on that rhythm, and Zephyr was great. We changed bridles today, and I liked the way I could slow down after pushing him. It was a nice round, and as always, if you are able to win a class here in Wellington it is always a good win because there are so many entries.”

Minikus and Zephyr went on to take first place in the FEI $35,000 1.45m class sponsored by Illustrated Properties. Of the 50 entries, only 12 went clear and returned for the jump-off. Minikus skillfully piloted Zephyr around the demanding course with an over two-second lead, clocking in at 64.36 seconds.

In addition to riding experienced jumpers, Minikus is well known for bringing young show jumpers up through the levels. This week, Minikus showed the up-and-coming Oldenburg stallion Lord Calador (Lordanos x Konstanze, Chacco-Blue) to first place in the $200 seven-year-old Developing Jumpers class.  Lord Calador is owned by Melissa Bilodeau, who discovered him in 2013 at the Winter Mixed Sales Auction in Vechta, Germany.

Minikus will continue to compete at the Winter Equestrian Festival at the Palm Beach International Equestrian Center for the rest of the winter show season, which concluded at the end of March. The series is the largest and longest-running hunter/jumper show circuit in the world.