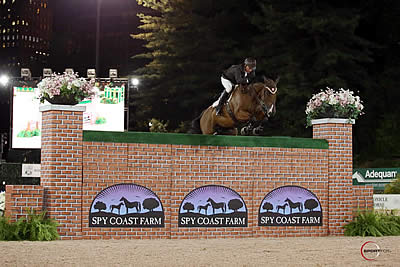 The three winners – Todd Minikus, Kama Godek, and Emanuel Andrade – each could have jumped basketball player LeBron James with an inch to spare as they soared over the 6 foot, 9 inch wall.

The Puissance, a traditional crowd favorite, returned this week to the Rolex Central Park Horse Show for the second year in a row. Competition began with a brick wall obstacle set at 4 feet, 6 inches high. Horse and rider pairs took turns jumping the wall, which was raised after each round. The event was called to an end after the three longest-lasting pairs each cleared the 6 foot, 9 inch wall with apparent ease. Todd Minikus on VDL Excel, Kama Godek on De Grande, and Emanuel Andrade on Clouwni were all named victors.

Minikus, an internationally successful show jumper with a U.S. Pan American Games Team Bronze Medal and over 150 Grand Prix wins to his name, was left wishing they’d had a chance to jump even higher. “VDL Excel jumped the 6 foot, 9 inches very easily,” he said. “Six feet and 9 inches is a big enough jump, but I think if they had raised it again, he would have been able to do that easily enough. He seemed really brave and comfortable.”

Minikus and the eight-year-old horse, owned by Autumn View Farm, have had an impressive summer even before the Puissance. Last month, the pair claimed the reserve title in the $20,000 Jumper Derby at Equifest II in Wayne, Illinois. “He’s is a very scopey jumper. I just knew he would do well in the Puissance,” said Minikus. “He’s young, and just breaking into the upper level classes. He’s got a lot of talent.”

With Minikus in the saddle, there’s no doubt that VDL Excel is not finished with his time in the limelight. Minikus’s own highest jump cleared to date is 7 feet and 4 inches, and he shows no signs of slowing down anytime soon. The Wellington, Florida based rider is next taking his talented team to compete at the Tryon International Equestrian Center in Tryon, North Carolina, where they will jump through the month of October.