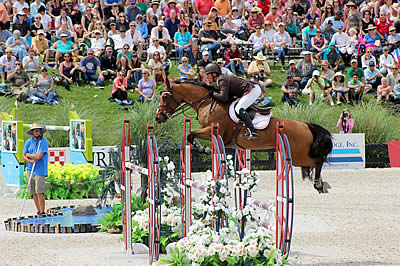 Ocala, FL (April 1, 2016) – Todd Minikus and his longtime partner Quality Girl have spent the last two weeks chasing a portion of a $1 million dollar prize across the country. On Sunday, the pair jumped a clean first round and finished in seventh place among a field of tough competition in the Great American $1 million Grand Prix held at HITS Post Time Farm in Ocala, Florida.

Minikus and Quality Girl, owned by the Quality Group, are not new to tough competition that comes with a winning check. The pair have won the $1 million at HITS Saugerties twice, and also placed in the top 10 on several other occasions in recent years.

This year, hoping to get a trifecta victory, Minikus flew Quality Girl out west to the HITS Thermal location in California to participate in the AIG $1 Million Grand Prix. The show served as a good warm-up for the next $1 Million class, which took place exactly one week later in Ocala, Florida. Making two cross-country flights and competing in two Grand Prix classes in such a short time is no small accomplishment. “There were huge jumps in both California and Ocala, and Quality Girl really bounced back after my ride in California and showed up ready to go in Ocala. She is an incredible competitor – nothing about the last two weeks was easy, and she couldn’t have been any better,” Minikus said, praising the 13-year-old Oldenburg mare.

The Ocala Great American $1 million Grand Prix course, designed by Irishman Alan Wade, was technical and tall, with all jumps meeting the 1.60-meter specifications. After 40 world-class competitors completed the first round, there were nine pairs to return for the jump off. “I thought the course was big and difficult and I am not sure anyone could have anticipated nine going clear,” said Minikus. Although Minikus and Quality Girl came into the jump off determined to win, they had two unlucky rails and were bumped out of a top five finish. “You really have to respect what it takes for these horses to do what they do. Quality Girl showed what a true professional she is to jump two huge tracks in one week and travel on a plane, which isn’t easy,” said Minikus.

Riders have a third and final opportunity to win a million dollar championship class at the Canadian Pacific $1 Million Grand Prix HITS Championship in Saugerties, New York, later this year. The FEI CSI 5* event will attract riders from around the world. Minikus is looking forward to being in the line-up of the class, which he has won twice in recent years.

Team Minikus has several more important events to look forward to before summer officially starts. Minikus and Babalou 41, owned by Two Swans Farm, will be working towards qualifying for the opportunity to compete in the $500,000 Rolex Grand Prix CSI-5* during the final week of the Winter Equestrian Festival. Next stop is the Longines Global Champions Tour in Miami, Florida from April 2-4 before returning to the Palm Beach International Equestrian Center for Equestrian Sport Productions Spring Series.

When not competing nationally and internationally, Todd Minikus offers sales and training services just minutes from Wellington, Florida’s Winter Equestrian Festival (WEF) show grounds. You can follow all the action from Team Minikus on Facebook and Instagram, or visit www.ToddMinikusShowJumping.com.