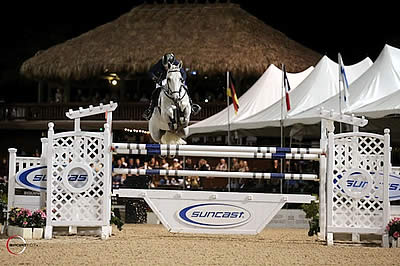 Watch Meredith Michaels-Beerbaum and Fibonacci 17 in their winning jump-off round! http://youtu.be/I3O6J6dvktU

Forty-four entries showed over Steve Stephens’ (USA) course Saturday night with six advancing to the jump-off and only two double clear rounds. First to go in the jump-off were Emanuel Andrade (VEN) and Hard Rock Z. Going for the slower clear round, they finished in 41.84 seconds, but had an unfortunate four faults for sixth place. Goldstein and Israeli Equestrian Partners’ Carisma were the first pair to clear the short course in 37.86 seconds and eventually took second place honors. Michaels-Beerbaum went next with Fibonacci 17 and completed the only other double clear round in a faster time of 36.96 seconds, but had to wait three more rounds to settle the victory.

Georgina Bloomberg (USA) and Gotham Enterprizes LLC’s Lilli took down the final fence to place fifth with four faults in 37.27 seconds. Springsteen and Stone Hill Farm’s Vindicat W followed, and although they completed the fastest round of the night in 35.40 seconds, the pair finished third with one rail down. Last to go, Beezie Madden (USA) and Abigail Wexner’s Cortes ‘C’ were poised to win with their time of 35.65 seconds, but the pair also had a late rail at the final fence to place fourth.

A three-time FEI World Cup Finals champion and one of the best female riders in the world, Meredith Michaels-Beerbaum has had many wins at the Winter Equestrian Festival throughout the years, but Saturday night marked one of her biggest. The rider has had great results with Fibonacci 17 all circuit and was thrilled to get a major victory with the talented gelding.

“He has been jumping brilliantly since he got here to Florida, but I have had the unlucky rail down in the two grand prixs that I have ridden him in,” Michaels-Beerbaum stated. “I knew he was in great form, but he is a new horse for me. I have had him less than a year. At this time last year he was jumping 1.40m classes, so he has made a big step up into the big league. I was fine-tuning some small details with him and changed the bridle a little bit for tonight and that seemed to be perfection.”

Fibonacci has quickly risen to stardom for his incredible jumping ability and he showed that off under the lights with some impressive jumps.

“He is actually a Swedish-bred horse, although he has a German father and a Dutch mother,” Michaels-Beerbaum detailed. “He was born in Sweden, so the Swedish take great pride in that fact. I got him in May last year. He has a different style than most horses. He jumps with his head up and a little bit straight in his back. That is something I have decided I cannot change and that is why I was trying to finesse the bridle a little so I could help him without interrupting his jump. I felt like I did that in the last grand prix, so I was very pleased with tonight.”

“He is an amazing jumper,” she continued. “I think he won the high jump award over most of the fences in the course tonight. It can often be difficult to sit on as a rider, but I have been practicing that as well. He is different, but he is wonderful.”

Michaels-Beerbaum was at the in-gate watching as the final round of Beezie Madden and Cortes ‘C’ solidified her victory. She commented, “I have to say, I expected Beezie to beat me, particularly with Cortes. He is her best horse, and I was really surprised when he hit the last fence. Sometimes the luck goes your way, and it was with me tonight.”

The rider was also very happy to get a win for Fibonacci’s owners, Jim and Kristy Clark, at Artemis Equestrian Farm LLC. “They are absolutely delighted because they supported me,” she acknowledged. “We had a discussion last year at this time and they said, ‘Listen, we’ll support you and go find some good horses.’ Fibonacci was the first horse we purchased and to have him win here tonight is just phenomenal. It is a really exciting and emotional win tonight.”

Danielle Goldstein was also very happy with her second place finish in the class aboard Carisma, a 16-year-old Swedish Warmblood mare (Cardento 933 x Maraton 600). Saturday night gave Goldstein the biggest finish of her career and a memorable moment in her partnership with the mare.

“This is for sure my best finish,” Goldstein added. “I have been riding here since I was a little kid and always wanted to be in the grand prixs and do well, and I think this was a huge second for me. I really could not be happier.”

Although one rail came down for Jessica Springsteen in the jump-off, she was happy with a great night with Vindicat W.

“I was a little worried,” Springsteen admitted after the class. “The last two grand prixs, we struggled a bit. He had a bit of time off and I feel like he is starting to get back into the groove of things, so I was really happy.”

Detailing her jump-off round, Springsteen explained, “I was pretty neat back to fence two and then I thought I was quick over the double, but then I kind of hooked him right in anticipation of that turn. I should have given him a little more of a chance there. We were pretty quick to the last fence, and he was really good there. I was lucky.”

Ring 8 competition started Saturday morning with the Taylor Harris Insurance Services (THIS) Children’s Medal 14 and under. The class consists of a first round where each trip receives a score, followed by a test of the riders with the four highest scores. After 26 horse and rider combinations completed the first round, Chloe Doherty, Kathryn Hall, Sloan Hopson, and Catalina Peralta were called back to test.

Doherty, from Chester, NJ, and her own horse, Canada, returned to test with a score of 81, but after a smooth test emerged victorious. Finishing in second place, with a first round score of 84, was Hall riding Prosecco 24. Hopson ended the day in third, and Peralta rounded out the top four.

In the first round there was a bending line where most riders were doing nine strides, but Doherty took a risk that paid off in the end. Doherty explained, “I was planning on doing nine, but I went in and had a good feeling, so I decided to do eight strides and it worked out.”

After having a few subtle mistakes in the first round, Doherty focused on remaining consistent during the test. “I rode the test how it came up. I focused on being as smooth as possible and fixing my mistakes from my first round and last week,” Doherty commented.

Canada and Doherty have been a partnership for the past three years. Originally the pair started out in 3′ classes, but has recently stepped up to bigger classes. “I started doing the 3’6″ equitation over the summer,” Doherty started, “but I still hope to go to THIS (National) Children’s Medal Finals in the fall.”

When Doherty is not competing with Canada in the Equitation ring, she competes with her other horse, Limoncello Z, in the Children’s Jumpers. Doherty hopes to move up to the Low Junior Jumpers with Limoncello Z during the 2015 show season.

In order to keep up with a busy show schedule, Doherty lives in Wellington full-time during WEF. Currently in the eighth grade, Doherty looks forward to continuing her riding career throughout high school and into college.

Sponsored by Suncast®, WEF 7 concludes on Sunday with the $85,000 Suncast® 1.50m Championship Jumper Classic in the morning. The class will be livestreamed at http://bit.ly/181N0m0. The Medium Pony Hunters will conclude hunter competition for WEF 7 in ring 11. For full results and more information, please visit www.pbiec.com.