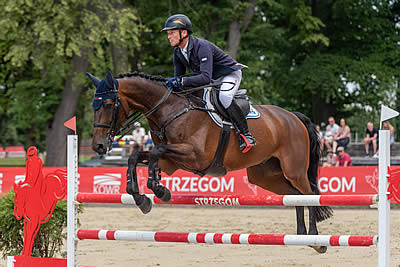 Michael Jung with the 8-year-old Highlighter were the best in the CCI4*-S, the most difficult class of Strzegom Summer Tour.

The rider took the lead during dressage and kept it throughout the whole class. He finished the cross-country without any mistakes on the fences, only ten seconds over the optimum time. He was clear in the jumping and won the class with the score of 31,9. Hanna Knüppel with Carismo took home the second place after a good cross-country and clear jumping. Sandra Auffarth with Viamant du Matz was third. All places on the podium went to riders from Germany.

Polish athletes were left out of the best ten. The best score belonged to Małgorzata Cybulska with Chenaro 2, as they finished on the 11th position.

Strzegom Summer Tour has seen more than 270 horses galloping through the hippodrome in Morawa. Riders from 18 countries were tested during 5 international and 5 national classes with various levels of difficulty.

The podium of the CCI3*-L class also belonged to Germany. Michael Jung with Creevagh Cooley won the class, Pia Münker with Commitment was second, and Dirk Schrade with Dajara 4 was third.

German rider Sandra Auffarth with Let’s Dance 73 took home the first place in the CCI3*-S class. She took the lead after dressage, went clear on the fences in the cross-country, and performed a flawless ride in the showjumping. Second place went to Felix Etzel (GER) with Stalliwa T, and third to Louise Romeike from Sweden with Waikiki 207.

Polish athlete Mariusz Kleniuk has finished the class in the 15th position with Huzar.

In the national CNC2* class, the best rider proved to be Disa Ottosson (SWE) with Elliot. Ben Leuwer (GER) won the CNC1* with A Cut Above, and Nikola Ecerowa (CZE) with Arleen had the best score in the CNC L. Polish rider Justyna Kociankowska won the L-18 class riding Primavera. The easiest class, CNC LL, belonged to Lisa-Marie Fischer (GER) with Goldmarie.