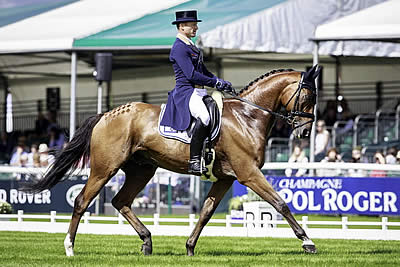 World number one Michael Jung (GER) has yet again set the target with a beautifully ridden dressage test on his old friend La Biosthetique Sam, now 17, to take an early lead at the Land Rover Burghley Horse Trials, sixth and final leg of the 2016/2017 FEI Classics™.

“Sam is on good form. You have to be 100% perfect in all es to win and this was not our best dressage performance, but I think the cross-country is tough enough to change the result.” — Michael Jung (GER), first-day dressage leader

Tattersall, fifth individually at the FEI European Championships in Poland recently, has worked hard at containing the sensitive thoroughbred Arctic Soul in the dressage. This represents a considerable improvement on their mark of 55.8 at Badminton when brilliant performances in the jumping phases elevated them a remarkable 60 places to eventual seventh.

“I’m chuffed to bits. Arctic Soul is very shy, so the key is getting him to feel confident, rideable and relaxed. Today he allowed me to place him so that all his movements were correct.” — Gemma Tattersall (GBR), second after dressage

American rider Mackenna Shea, 24, has made a great start to her first run at Burghley and is in third place on a score of 46.1 on Landioso, a 15-year-old Dutch-bred gelding that she has produced since he was four. Shea has based herself this summer with British rider Rodney Powell, but their campaign started late due to Landioso suffering from shipping fever.

“‘I didn’t realise what a big step Burghley would be after Kentucky. Just walking the course takes so long!” — Burghley first-timer Mackenna Shea (USA), third after dressage

Jung may have an unassailable lead in the FEI Classics™ — his nearest rival, Maxime Livio (FRA) is not competing — but has he left the door open in the dressage for Burghley honours?

A host of stars could challenge for the lead. These include Zara Tindall (GBR) and High Kingdom, the pair that finished third behind Jung (on fischerRocana) at Kentucky (USA) in April, and American rider Lauren Kieffer on the lovely mare Veronica.

Nicola Wilson (GBR), currently third in the FEI Classics™, does not have a Burghley ride and looks vulnerable to being overtaken in the series by the likes of Nicholson, fourth on the leaderboard, Price, eighth, and Tindall, ninth, all three holding obvious chances to take the prize money on offer for third.