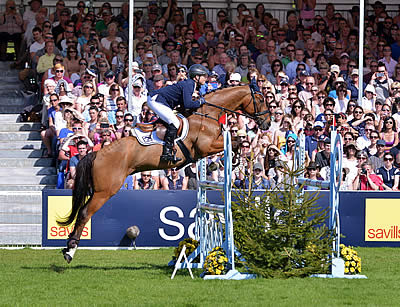 He is the first German to win the 67-year-old event and, in the process, has become only the second winner of the Rolex Grand Slam of Eventing.

The top four riders after Cross Country all went clear in a tense final Jumping phase, but Jung was the clear winner by a huge nine-penalty margin, and his final score of 34.4 was the lowest in Badminton history.

When asked the secret of his success, the Olympic champion and world number one said simply: “I just like riding horses. It’s not only my job; it’s my hobby.”

And when asked if he felt like shedding a tear, he smiled and said: “I think I might. Sam is more than just a good horse to me; we’re a special partnership.”

He added: “I need a bit of time for this to sink in, but it is a special moment for me, especially when you think of the history and tradition of Badminton and all the great riders who have won it before.

“We [my family] agreed that we would treat this as a normal competition but now I can realise what it means. It’s not just for me; it’s a win for my whole team.”

Jung’s extraordinary run of success began with victory at Burghley (GBR) last September on his parents Joachim and Brigitte’s La Biosthetique Sam FBW, followed by the European title a week later on FischerTakinou, his potential ride at the Rio Olympic Games, and, last weekend, a repeat win at Kentucky with FischerRocana FST.

Andreas Ostholt (GER) scored a career best in second place on the 13-year-old Westphalian gelding So Is Et and said: “It’s like a win for me. My only expectation after two unlucky times at Badminton was to finish in a good way, so this is much more than I could have wished for.”

Gemma Tattersall (GBR) thrilled the home crowd in third place on the fabulous Cross Country horse Arctic Soul and looks to have a good chance of securing a place on the British team at the Olympics.

“I’ve had such a journey with this horse, managing to keep him when he was going to be sold, so this is a dream come true,” she said.

“What a fantastic horse – he was still racing over fences when he was six years old. He has been in the form of his life this spring and I knew it was just a case of us competing at the top of our game. He did a personal best in the dressage and he’s finished on that score, so I could not be more proud of him.”

The New Zealanders showed what a force they will be in Rio. The legendary Sir Mark Todd was a popular fourth on Leonidas ll and Badminton first-timer Clarke Johnstone’s journey from New Zealand paid off with fifth place on Balmoral Sensation – he is now second, behind Jung, in the FEI Classics™ 2015/2016.

Jock Paget was sixth on Clifton Lush, Jonelle Price 10th on Classic Moet and Blyth Tait, riding at his first Badminton for 13 years, 13th with a double clear on Bear Necessity V.

The British selectors also have interesting choices to make. Kristina Cook (GBR), a medalist in Beijing and London, has three horses qualified for Rio and, although Star Witness, on which she finished eventual seventh at Badminton, is considered the weakest in the Dressage phase, he rose 35 places as the fastest horse across country and jumped a double clear.

Izzy Taylor, a great-niece of the 1962 Badminton winner Anneli Drummond-Hay, could also be going to her first Olympics after finishing ninth on the CCI4* first-timer Allercombe Ellie, the highest-placed mare.

Worryingly for everyone, Michael Jung joked that he was not ready to retire Sam yet. “He was like a three-year-old this morning and I like to think that Tokyo (the 2020 Olympics) might be his retirement event!”

Michael Jung (GER), 33, is the first rider in history to hold Olympic, World and European titles simultaneously and was the first to win four championship titles consecutively. He came to prominence in 2009, when he won the Luhmühlen CCI4*, the FEI World Cup™ Eventing final in Strzegom (POL) and an individual European bronze medal in Fontainebleau (FRA), all on La Biosthetique Sam FBW.

The pair went on to win the world title in Kentucky (USA) in 2010, double European gold in Luhmühlen in 2011 and double Olympic gold in London (GBR) in 2012. In 2013, they were second at Badminton CCI4*; last year they finished third at Kentucky (USA) and now they have added the Burghley and Badminton CCI4* titles to their collection. Jung has also won Kentucky twice in succession on FischerRocana FST.

Jung has equaled Ginny Elliot’s (GBR) record of three European titles on three different horses: in 2011 on La Biosthetique Sam FBW, in 2013 on Halunke and in 2015 on FischerTakinou. He also won world team gold and individual silver medals on FischerRocana FST in 2014. He lives in Horb, Germany, where his parents, Joachim and Bridgette, own a riding establishment.

La Biosthetique Sam FBW is a 16-year-old by Stan The Man out of a Heraldik mare. He is owned by the Jung family, Erich Single and DOKR.