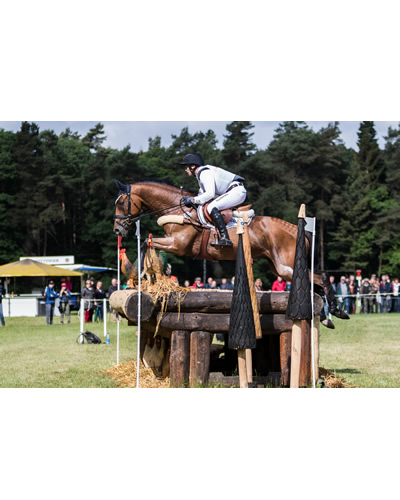 Michael Jung (GER), pictured here with La Biosthetique Sam at last month’s CCI4* Luhmühlen, fourth leg of the FEI Classics™, has jumped back to the top of the FEI World Eventing Rankings. (EventingPhoto/FEI).

Jung (32) jumped to the top of the FEI World Eventing Rankings in May for the first time in his career, breaking the one-year reign of William Fox-Pitt (GBR). Fox-Pitt then toppled Jung in June to take back his lead.

Now Jung, the first Eventing athlete to hold the European, world and Olympic titles simultaneously in 2012 after scoring individual and team gold at the London 2012 Olympic Games, and Fox-Pitt, the multiple Olympic, World and European medallist, have switched places yet again!

Jung now has a 17-point lead over Fox-Pitt (591 points), with New Zealand’s Jonelle Price up into third (520 points). Germany’s Ingrid Klimke – winner at Luhmühlen and current leader of the FEI Classics™ series – has also moved up and is now in fourth (504 points). Australia’s Stuart Tinney has leapt into the top 10 and is now in ninth from 17th in the FEI World Eventing Rankings.

Jung started riding aged six and came to prominence after making his international début in 2009, when he won the Luhmühlen CCI4* on home-turf in Germany, the FEI World Cup™ Eventing final in Strzegom (POL) and an individual European bronze medal in Fontainebleau (FRA). These successes all came with La Biosthetique Sam FBW, the horse that Jung rode to individual gold at the Alltech FEI World Equestrian Games™ in Kentucky (USA) in 2010 and double gold at the London 2012 Olympic Games. Jung was also part of Germany’s golden team at last year’s Alltech FEI World Equestrian Games™ in Normandy (FRA), where he finished second behind his compatriot Sandra Auffarth in the individual rankings.

Jung has also claimed team and individual gold at the last two FEI European Championships (2011 and 2013). Now, just over three months away from the much-awaited Longines FEI European Eventing Championships 2015 at Blair Castle in the Scottish Highlands (10-13 September), he will preparing to defend his title.