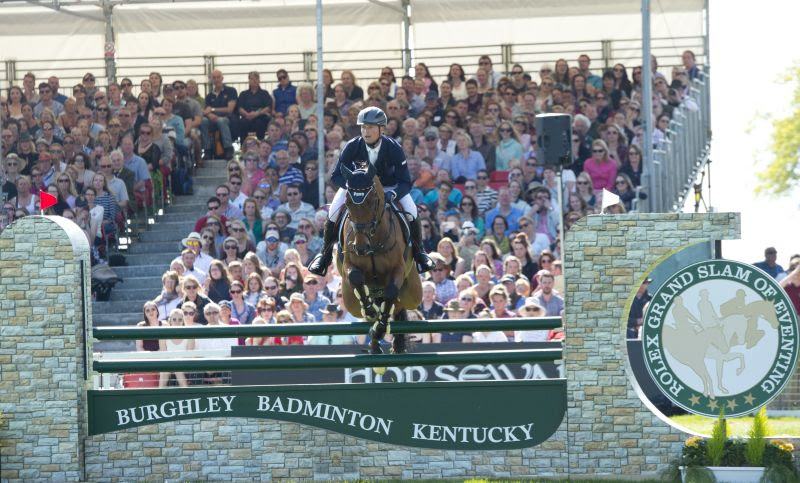 8 May 2016, Badminton, UK – It was a day of records at the 2016 Mitsubishi Motors Badminton Horse Trials as world number one Michael Jung was crowned the new Rolex Grand Slam of Eventing Champion having kept his lead from the first day of the competition despite huge pressure from the world’s leading riders.

Jung is the first German rider to ever win the Badminton Horse Trials in its 57th running and he created further new records by being the rider to finish on the new lowest ever score of 34.4, and the first time in 10 years to lead the dressage and then go on and win the Badminton title.

Riding La Biosthetique Sam FBW, Jung was last to go into the packed arena in front of HRH Duchess of Cornwall and went into the final show jumping phase at Badminton with two rails in-hand overnight. Showing no signs of pressure, Jung rode another immaculate clear round without touching a single rail.

The 15,000 spectators held their breath as Jung expertly guided ‘Sam’ around the 13-fence course, with Jung punching the air to the delight of the supporters, fans and watching global media. In second place was his fellow compatriot Andreas Ostholt riding So Is Et, who rode a superb clear to hold his position. In third place was Great Britain’s Gemma Tattersall riding Artic Soul who finished in her highest ever Badminton place.

In the previous cross-country action, 48 of the 75 starters finished, with 32 clear rounds, 11 of them inside the optimum time.  The experienced Kristina Cook will have impressed the GB selectors having risen 35 places from their starting dressage in 42nd to finish 7th on Star Witness.

Speaking after the final show jumping phase, a triumphant Jung said, “I think this [the Rolex Grand Slam of Eventing] is really special as you know that just only one person has won it before; that says that it is really difficult to win all three events in a row. I am very, very happy and so proud of my horse.”

Andreas Ostholt said, “My aim was always to be here on the podium, so I feel really, really happy. For me it is like a win. To finish in second place is more than I could ever wish.”

Competing for the third time at Badminton with her best ever finish on her horse Artic Soul, Gemma Tattersall said, “To come back with this horse who I have had such a journey with and coming third at Badminton is a total dream come true! The crowd was amazing; I managed to keep his concentration and he jumped the best round of his life.”

In 2001 Rolex was inspired to link the three foremost Eventing competitions in the world into a Grand Slam. Badminton – the British horse trials on which the modern sport of eventing was founded, Kentucky – the premier US event, and Burghley – the East of England’s showpiece event, formed the competition.

Every year these three events attract world class competition and crowds of enthusiastic supporters eager to bear witness to equestrian greatness. It became immediately apparent that, completing the challenge and winning the Rolex Grand Slam of Eventing, would require a series of outstanding performances from a remarkable athlete.