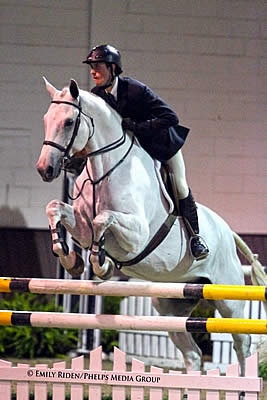 North Salem, NY – September 13, 2014 – Every year, junior riders from around the country strive to earn points to qualify for the ASPCA/NHSAA Maclay Regional Championships.

On Saturday, 52 of those young, qualified riders gathered at the American Gold Cup CSI4*-W to compete in the Region 2 ASPCA/NHSAA Maclay Regional Championships and to vie for their shot to ride at the esteemed ASPCA Maclay Horsemanship Championship Finals at the National Horse Show this November.

Of the riders competing at the Region 2 Maclay Regional Championships, there was one rider in particular who has stood out to the judges for two years in a row: Michael Hughes. Hughes took the top call in the class last year, and he came back to do the same on Saturday.

The 18-year-old from Allendale, NJ shot to the top of the judges’ scorecards following the over fences phase, conducted over a course of multiple bending and broken lines and in-and-out combinations in the indoor arena of Old Salem Farm. Hughes then held that lead through the flat phase that is unique to the Maclay equitation format, clinching the victory, just as he did last year.

This year however, Hughes also got to earn the win alongside longtime friend and North Run barn mate, Ailish Cunniffe who finished in second.

“Together we both owe a lot to Missy [Clark] and John [Brennan]. They have taken us so far along in the equitation,” Cunniffe said. “We’re both so thankful for all of their help and both of our parents as well. My mom and dad and his mom and dad have both been big factors.

“My parents are professionals just like Mikey’s,” Cunniffe said, in speaking of her parents, Frank and Bonnie Cunniffe, and Hughes’ parents, Eamonn and Cathy Hughes. “We’ve known each other for quite some time. It’s neat to be doing well together.”

While both Hughes and Cunniffe credit their parents and North Run for much of their success, they are also quick to recognize the horses they competed today. For Cunniffe, that meant recognizing Venice, the equitation horse that she has owned for over a year, but for Hughes, up until this morning he still had the decision to make as to what horse he would be on.

“I didn’t really know which horse I was going to do,” Hughes said. “I had to choose between a younger horse of Missy’s and an experienced horse that had already been there, Campreoll. I knew [Campreoll] was going to go in and be really good. I really have to thank Cailin McNamara, the owner, and Brian Feigus for letting me ride him.”

With their performance together today, Campreoll will most likely be the mount that Hughes rides for the Maclay Finals at the National Horse Show, but he will be deciding for sure over the next month.

“I still have a few horses to choose from that weren’t even here. I have to thank all of the people that have given me horses to ride,” Hughes said.

Choosing the right horse to allow him to ride his best at the Maclay Finals is particularly important this year, as it is Hughes’ last year competing as a junior.

While Cunniffe still has another shot at the Maclay Finals victory after this year, it is guaranteed that they will both work equally hard for their shot at the victory and the possibility to earn their place in the record books.

“The fact also that it’s been around for so long and that it used to be at [Madison Square Garden] makes it a special class,” Cunniffe said.

“It means a lot,” Hughes added. “Doing the equitation has been so much fun. You learn so much from it, and going to finals every year and having a new experience is great whether you win or not.”

All of the top entries from today’s Regional Championship have qualified for the ASPCA Alfred B. Maclay Horsemanship Championship Finals at the National Horse Show, to be held Nov. 2, 2014. For more information, visit www.nhs.org.