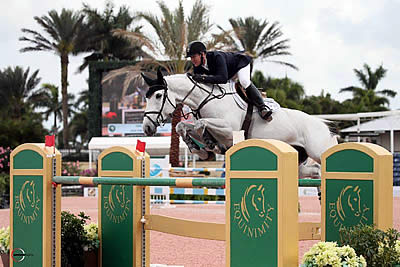 Riding Hija van Strokapelleken, an 11-year-old BWP mare by Calido I x Azur de Paulstra owned by Evergate Stable LLC, Ward topped a class of 52 entries and 19 in the jump-off over an Anthony D’Ambrosio-designed course. They finished the short course in 35.20 seconds for the win.

Peter Pletcher and River, owned by Shaw Johnson Price, kicked off week seven at the Winter Equestrian Festival in style with a championship win in the Green Hunter 3’3” division. The pair won a first in the under saddle and a first, second, and third over fences. Havens Schatt was awarded the reserve championship aboard Tyrion, owned by J T Farm, with a first, first, and fourth over fences and a fifth in the under saddle.