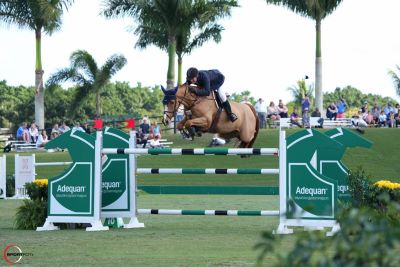 Wellington, FL – February 3, 2022 – International competition resumed Thursday, February 3, 2022, with athletes from across the globe setting up to challenge the track on the Derby Field at Equestrian Village. Week 4, sponsored by The Bainbridge Companies, is the second week of the Winter Equestrian Festival (WEF) circuit to feature FEI classes on the turf. The highlight event of the day was the $50,000 Adequan® WEF Challenge Cup Round IV CSI4* which saw 65 of the world’s best combinations. Olympic team gold medalist McLain Ward (USA) once again saved the best for last as the final contender to return and captured the victory aboard successful partner, Contagious, owned by Beechwood Stables.

Anderson Lima (BRA) designed the two-round test and at the halfway mark only seven entries were lined up for the return. By the end of the first round,12 of the original field had qualified for the jump-off, but three entries – made up of Kent Farrington, Margie Goldstein-Engle, and Carlos Hank Guerreiro – chose to save their jumps for another day and withdrew. The nine pairs that remained represented the United States, Egypt, Brazil, Spain, and Mexico.

Each duo gave it their best effort and the lead was exchanged several times, but Spain’s Sergio Alvarez Moya and his own 10-year-old BWP gelding Malibu De Muze (Nabab De Reve x Tornedo FCS) had a flawless round with a time of 43.34 seconds. However, the victory was not yet sealed and, as the last to take the field, Ward once again proved his skill with an effortless round, shaving almost an entire second off of the previous leading time in 42.57 seconds.

The Equine Tack and Nutritionals Ring 6 played host to the young and green hunter divisions where Tamara Provost, of Westfield, IN, rode Cayman to the championship title in the Green Hunter 3’ division, sponsored by TRM.

The close results made for a deciding second day of competition. Provost and Cayman bested the field in both over fences classes on Thursday with scores of 86 and 88 to push them to the top of the leaderboard for the overall championship title. Hannan and Surf City finished with the reserve championship honors.