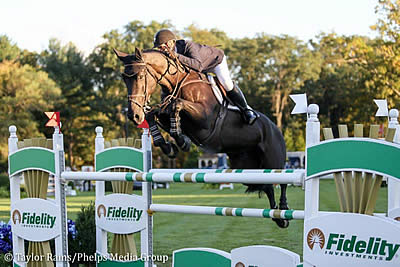 North Salem, N.Y. – Sept. 29, 2018 – Saturday hosted the $70,000 Fidelity Investments® Classic CSI4* at the American Gold Cup, where McLain Ward (USA) captured yet another win in the day’s highlight event, this time aboard Tradition De La Roque, owned by Kessler Show Stables Europe B.V. The pair bested a total of 51 entries with a double-clear performance in 35.84 seconds.

Held on the Grand Prix Field at Old Salem Farm, Alan Wade (IRL) built a challenging 13-obstacle first round track set at 1.50m in height, which saw 11 cross the finish line with no faults to secure their spot in the jump-off.

Canada’s Mario Deslauriers was the early double-clear pathfinder in the jump-off with Amsterdam, owned by Luja LLC and Wishing Well Farm LLC. They stopped the timers in 38.13 seconds, but would take home fourth place honors at the end of the day.

Student of Ward’s and fellow NetJets® U.S. Show Jumping Team gold medalist, Adrienne Sternlicht (USA), was next to jump fault-free over the shortened course with Sagamore Farms’ Fantast in 37.44 seconds to move into the lead.

However, it was Capt. Brian Cournane (IRL) and his own and Christine Stiller’s Penelope Cruz who narrowly slid into the first place position two rounds later, finishing fourth-tenths of a second faster than Sternlicht in 37.05 seconds.

Next up in the order, Ward, who has been having great success with a new string of horses at this year’s American Gold Cup, blazed around the eight-fence track with the 11-year-old Selle Français mare. In only their second show together, they posted a time of 35.84 seconds to overtake Cournane with one more combination left to go.