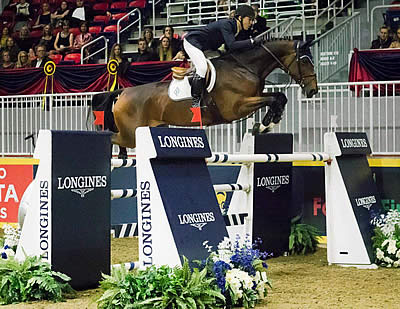 A starting list of 22 horse-and-rider pairs competed over the first-round course designed by Portugal’s Bernardo Cabral set in the historic Ricoh Coliseum at the Royal Agricultural Winter Fair. A fair, yet challenging, track featured a triple combination, a massive triple bar set at 1.90m wide, and flowing turns that tested pairs’ adjustability in between fences.

“Experience tells us that when you build something like that, a little bit quick and not too big but delicate, not very rider demanding but horse demanding, the cream rises to the top,” Cabral said.

The 64-second time allowed proved to be appropriately set with not one competitor accruing a single time fault. However, despite the majority of the field giving the track a measured ride, six competitors would finish on a total of 4 faults, eight on 8 faults or more, one eliminated, and with two riders, Sharn Wordley (NZL) and Tiffany Foster (CAN), retiring.

“The course actually came very fast at you and I think that’s why a lot of the rails went down,” said Ward. “The jumps were quite careful; it wasn’t a huge course and there wasn’t a whole lot of time in between jumps.”

The track in the final round was a test of handiness and speed with all but one competitor riding double clear. It was Kent Farrington (USA) and Creedance who produced the quickest round of the night in 35.19 seconds but would finish on 4 faults, placing them at second. Rounding out the night’s podium was Nick Skelton (GBR) and Big Star, with a rail and a time of 37.26 seconds. Fourth went to Shane Sweetnam (IRL) and Chaqui Z while Canada’s own Mac Cone finished fifth with Gasper van den Doorn. At night’s end, it was McLain who delivered the evening’s first and only double clear, recording a time of 36.02 seconds to secure the victory.

“Last week in Kentucky, Kent laid down such an incredible round so I was trying to catch him,” Ward added. “But when you’re pressing that hard often a mistake happens and it did: Kent and Nick both had a fence down today so it took a lot of that pressure off. But Shane [Sweetnam] is a trier and a competitive guy. I couldn’t take him for granted so I still wanted to put enough pressure on, but certainly I took a notch off of speed here or there.

“This venue has been very good to me so it’s like coming home. When you have a horse like Azur you just try and stay out of her way, and she’s normally giving a great performance. Every once in a while, I don’t mess it up.”

Kent Farrington continues to hold the top position in the Eastern Sub-League standings heading into the next event in Wellington, Florida on February 5, 2017.