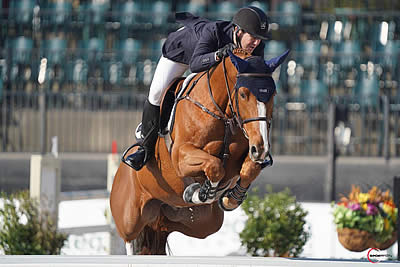 The Ghuiherme Jorge (BRA) course design saw 100 entries challenge the first round, with only six pairs earning the chance to tour the jump-off track. Ward and the 2009 German Sport Horse gelding (Contagio x For Keeps) owned by Beechwood Stables LLC managed to make the best of a tough situation with a field stacked with stiff competition, he shared:

“It’s a tough situation. It’s a three-star event, but because of the state of the world and our sport right now, you have 100 [competing] today,” he analyzed. “To me, that was like a five-star 1.55m track. I’m lucky to have a horse like Contagious who’s up to that, but you also saw a lot of horses today who were surprised by it.”

Coyle and the 2007 British Warmblood gelding (Lupicor x Concorde) owned by Elan Farm toured the Ghuiherme Jorge (BRA) course design without seeing many riders go, he admitted, but having a naturally quick horse made all the difference. “I rode one horse before Picador in the class, so I kind of knew the distances. I didn’t get to see Eugenio go, but I saw Kristen’s ride and she was fast. Luckily, I have one of the fastest horses there is! The course was nice, but honestly, it’s the horse,” Coyle emphasized about where he gained the advantage in a class of 42 starters.