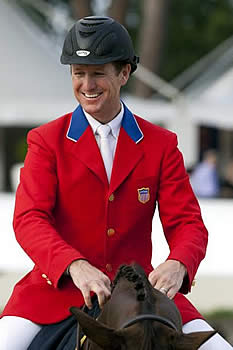 Ward grew up riding and competing the equitation himself, and has gone on to help the United States Show Jumping Team win two Team Gold medals at the 2004 Athens Olympics and the 2008 Hong Kong Olympics. He is one of the most decorated riders in Show Jumping, with wins in almost every major grand prix, and is well known for his textbook style in the saddle.

“It is a huge honor to judge the Maclay Finals because it is the most prestigious national championship of equitation in our country,” stated Ward.  “It is great honor from your peers that they respect your level of riding and horsemanship enough to give you the opportunity to be in that position.”

Ward continued, “All judging comes down to a philosophy. I look at equitation as a stepping stone to something even bigger. While some junior careers end [after the Finals], many of those that are most successful in the equitation go on to have careers as top show jumpers. If you look at it as a stepping stone, and you see the different ways the rider has developed, the talent as well as their horsemanship and mental point of view, the most well rounded, well prepared junior wins in the end.”

Tauber is a past equitation champion herself, winning both the AHSA Medal and ASPCA Maclay Finals in 1965. She is a top rated USEF judge, course designer, trainer and rider and has been involved in the governance of the sport for nearly forty years. In addition to the presidency of the USEF, she serves as the vice president of the U.S. Hunter Jumper Association. Tauber has judged all the major equitation finals, most recently judging USEF Medal Finals. She has also judged the IHSA Finals and the NCAA Finals twice.

“I have judged the ASPCA Maclay Finals several times in the past and each time it has evolved to a higher standard as a national championship competition,” explained Tauber. “We have more depth of talent in our young riders than ever before so designing the courses, the flat work, and the tests are an exciting challenge.  I am really looking forward to working on these with McLain. He is an Olympic Gold Medalist, a great trainer, and a super stylish rider over Grand Prix height jumps. Combining our talents to create appropriate tests for the junior riders at this level and collaborating on our assessments of the riders is definitely something to look forward to for this year’s finals.”

Tauber concluded, “The Maclay Finals format provides the judges with an opportunity to have a very thorough look at the competitors both over fences and on the flat. The riders should demonstrate a complete knowledge of riding a horse on the bit in a good rhythm as well as a sophisticated coordination of their aids in order to provide a positive influence on the horse’s performance; plus the ability to maintain that rapport and focus under pressure. And, of course, do all of this with poise and style. It is, after all, an equitation championship.”

Eight regional competitions will determine which top junior riders will travel to Kentucky to compete during the 2014 ASPCA Alfred B. Maclay Finals, which will be held Sunday, November 2, 2014.