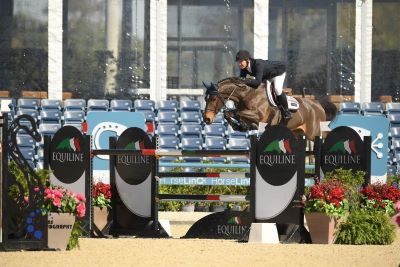 Wellington, FL – December 10, 2020 – The ESP Holiday II CSI4* hosted its first FEI classes of the week on Thursday, December 10, at the Palm Beach International Equestrian Center (PBIEC). Serving as the featured event of the day, the $37,000 Vobev Holiday II Opener CSI4* attracted 69 horse-and-rider combinations to the International Arena to vie for the top prize and FEI ranking points. Always a speedy pair, McLain Ward (USA) and Catoki (Catoki x Cartello B), the horse he co-owns with Bob Russell and Marilla Van Beuren, galloped to first place to commence the week on a high note.

“He is so fast, so it’s kind of his job to try to win these classes and to pay for the others to show,” commented Ward of the 2009 Westphalian gelding. “Kent had a great round on a very fast horse, and I was a little concerned the course didn’t actually suit Catoki because they were doing a leave-out in one line in the speed phase, and I really didn’t think I could do that. But he’s a quick enough horse even without that, and he really jumped great.”

Run under a modified power and speed format, the class featured a pattern by course designer Héctor Loyola (PUR) and challenged exhibitors to jump clear over the first nine fences and then immediately continue on to the final six obstacles, regardless of whether or not faults had been incurred in the initial phase. The time for the latter portion of the course served to rank competitors.

“He’s fast. Honestly, I didn’t watch Kent because this horse really goes with his own game plan, and he’s super fast,” remarked Ward of how he thinks he won the class. “Sometimes when you try to do what others do, you end up making a mistake. I try to do the best round I can do with him, and I knew it was as fast as I could try to go within what his strengths were.”

As the fourth-to-last out of the starting order, Ward capitalized on Catoki’s quick footspeed and a bold inside turn option to just barely edge ahead of the frontrunners, crossing the finish line in 29.67 seconds to jump to the top of the leaderboard by mere milliseconds. The final challengers could not catch the leading combination, solidifying Ward and Catoki as the victors in the $37,000 Vobev Holiday II Opener CSI4*. Farrington and Austria 2, owned by Take the High Road LLC, retained second place, and Darragh Kenny (IRL) earned the final podium placing riding Oakland Ventures LLC’s Belo Horizonte with a fault-free time of 29.99 seconds. In total, 31 partnerships finished the class without any faults to their name.

“I think great efforts are being made for this to go on,” noted Ward of competing under a COVID protocol. “We’re all welcoming a vaccine and some normalcy, and being able to be outside and compete with, obviously, the right precautions is great. It feels as close to our normal life as we can get right now.”

The morning kicked off in the International Arena with 36 exhibitors in the $1,000 Bainbridge 1.40m CSI4*, which also ran as a power and speed class, though only those competitors who jumped the first half of the course without any faults continued for the second timed portion. A total of 11 duos finished the first half of the track fault-free to advance to the speed phase, which produced a final number of just five pairs without a single fault. The time-allowed proved to be a factor as 11 partnerships earned a single time fault during the power phase of the class to keep them out of contention.

As one of the final exhibitors, Flo Norris (GBR) took over the top spot from Laura Kraut (USA), who had held the lead since halfway through the class, riding Cisca Norris’ Gin Chin Van Het Lindenhof (Chin Chin x Calido I). Norris’ clear time of 32.84 seconds kept her at the top of the standings with the 2006 Belgian Warmblood gelding, followed by Kraut on Cherry Knoll Farm Inc.’s Haley with no faults in 33.45 seconds. Daniel Bluman (ISR) rounded out the top three with the ride on Gerardo Pasquel’s Alamo after tripping the timers clear in 39.97 seconds.