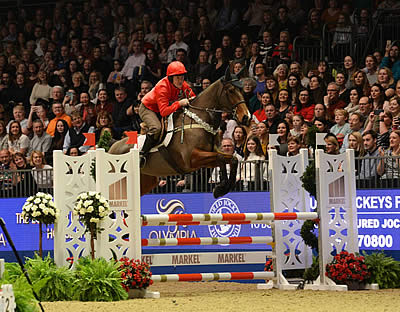 In a first for Olympia Horse Show, a team of five top-class female jockeys took on their male counterparts in the Markel Champions Challenge in aid of the Injured Jockeys Fund – a fast and furious Show Jumping team relay competition. The Boys’ Team – with stand-out rides from Richard “Dickie” Johnson and Jim Crowley – did just enough to beat the Girls’ Team by a combined time of little under eight seconds, while Girls’ Team captain Bridget Andrews earned a consolation winning the prize for the quickest round.

The evening drew to a close with The Longines Christmas Cracker. Out of a field of 28 competitors, 13 jumped a clear first round and progressed to the jump-off, which then saw a further six pairs jump double clear. While Holly Smith (Claddagh Iroko) and Laura Kraut (Confu) put themselves firmly in contention, it was Robert Whitaker and his nine-year-old bay mare El Wee Widge who rose to the occasion, crossing the finish line in an unbeatable time of 34.51 seconds.

Jenny Kimber and Rogue took the honours in The Kennel Club Large Novice Dog Agility Finals on the third evening of canine competition at Olympia. After a fantastic qualifying round win, Naarah Cuddy and Lemon were last to run in the Final. The pressure was on for the pair to beat a fast and accurate round set by Jenny Kimber and Rogue, but an unfortunate early fault dashed their title hopes. The afternoon performance of the Osborne Refrigerators Shetland Pony Grand National was won by Zak Kent and Briar Smokey Joe, while the evening performance was won by Lucy Aspell and Magheradartin Beeswax.

Jockeys Go Flat Out for Charity

The Markel Champions Challenge in aid of the Injured Jockeys Fund (IJF) proved a huge crowd pleaser when, for the first time, five female jockeys, including recent big-race winner Bryony Frost, took on their male counterparts against the clock over the coloured poles in the unfamiliar environment of a densely packed indoor arena.

The fiercely competitive Boys’ Team, trained by Olympic gold medallist Nick Skelton and captained by 20-time champion Sir “AP” McCoy with champion jockeys Richard Johnston and Ryan Moore, were victorious with a collective time of 151.16 seconds against the girls’ 159.11, but it was Bridget Andrews who was fastest of all, upholding female honour with the prize for the quickest round, in 33.88 seconds.

Her fiancé, Harry Skelton, caused great hilarity when, last to go for the Boys’ Team and riding one of Laura Kraut’s jumpers, he suffered tack malfunction when the hackamore bridle ended up around the horse’s ears. Not to be defeated, he set off again, after some hasty repairs with a cable tie, but the same thing happened so he borrowed a teammate’s horse.

However, Harry had to settle for the third fastest time of 35.85 seconds behind flat jockey Jim Crowley. “The wedding’s still on,” announced commentator Clare Balding. Harry promised: “We’ll be back next year – with better tack.”

The jockeys were clearly thoroughly enjoying their Christmas party, but IJF president AP was quick to thank Olympia for giving the charity this great fund-raising platform. Next year, a third rehabilitation centre, named after the late commentator Sir Peter O’ Sullevan, will open in Newmarket.

Exell Is in the Driving Seat

Boyd Exell, the reigning world champion in Carriage Driving, laid down the strongest possible marker for the final of the FEI Driving World Cup™ leg, presented by Dodson & Horrell, at Olympia, The London International Horse Show.

In a display that left spectators breathless, the defending champion, who is competing here on a wild card, was second into the arena behind British hopeful Dan Naprous, who had driven a well-controlled clear round.

Exell, too, went clear but knocked 15 seconds off Naprous’s time and no one thereafter could come close; American driver Chester Weber suffered the disappointment of being eliminated for missing the first obstacle. Belgium’s Glenn Geerts claimed second place and the vastly experienced Koos de Ronde from the Netherlands was third.

In the drive-off between the first three, de Ronde bettered his first-round time but collected 12 seconds in penalties. Geerts also bettered his time, but his additional eight-second penalties gave the Australian maestro breathing space.

However, he had no need of it. In an electrifying drive, he knocked eight seconds off his first round time to romp into first place, 30 seconds ahead of Geerts and de Ronde.

“I’ve put two new horses into my team – one in the lead and one in the wheel – and they’ve moved the speed up like you cannot believe,” Exell explained. “They were machines today – I could not be more pleased with them, although, of course, tomorrow is the all-important competition.”

There was a great boost for British driving when Naprous, who was also previously performing at Olympia as leader of the Devil’s Horsemen Stunt Display Team, was the only other driver to go clear – he only missed the drive-off by two seconds.

An Olympia victory was just what the doctor ordered when, two weeks after having his appendix removed, Robert Whitaker produced a masterful performance in a 13-horse jump-off for Friday’s main class, The Longines Christmas Cracker.

“I just said to Michael: ‘I’m going to have a bit of a go’ as the horse likes to go forward,” said Robert, who took over the ride when his uncle was injured, finishing second in a major class at Oslo Show. “I went to Michael and said that I was really short of horses and he kindly let me have El Wee Widge.”

Laura Kraut, a world team gold medallist this year, came closest to catching Robert – she was just 0.4 seconds slower on the grey Confu, beating young British rider Holly Smith on Claddagh Iroko by a mere 10th of a second.

Keeping it in the family, Robert’s father John had the crowd roaring in excitement, but he lost time trying to keep the mare Leen O.L. on her line and had to settle for fourth place.

Earlier, to the delight of the packed home crowd, Robert’s cousin, William Whitaker, riding Lammy Beach, topped a British one-two-three-four in the Keith Prowse Father Christmas Stakes, an accumulator class against the clock. A final tricky joker fence gives double points if jumped cleanly, but is double the penalty if knocked down.

“It’s like you’re riding in a speed class, but then have that big last fence to think about,” explained William, who represented Britain at the FEI World Equestrian Games™ this year. “I had a lot of quick ones to come after me so I had to take a few risks and got away with it. I wanted one stride less to one fence, and I didn’t get it, so I knew I had left some room for others to catch me.”

The buzzing atmosphere suited the 10-year-old Irish-bred gelding. “The closeness of the crowd doesn’t suit some horses, but it really makes him light up,” said William. “I am really happy with this horse and it is a real privilege to ride here.”

With two more days to go, Norway’s Geir Gulliksen is currently Leading Rider of the Show with five placings, pushing Darragh Kenny from Ireland into second. William Funnell, who has been runner-up three times, is third.

Robert Murphy and Chablis Are the Toast

The Voltaire Design Under 25 British Championship Final ended on a thrilling high note when, last to go in an eight-horse jump-off, 18-year-old Robert Murphy rode an audacious round on Newbridges Chablis to overhaul the brilliant early target set by Harry Charles, 21, on Vivaldi du Dom.

This prestigious class, which has been won by the likes of Scott Brash and Jessica Mendoza, gets stronger every year, the bulk of the field being represented by the talented sons and daughters of such well-known horsemen such as Michael Whitaker, Graham Fletcher, Mike Saywell, Duncan Inglis, Peter Charles, the late Tim Stockdale, and Badminton Horse Trials course-designer Eric Winter.

Robert, the son of former leading jumper Peter Murphy, set a scorching pace, confidently taking out strides and turning on a sixpence, to snatch the win from Harry by 0.5 seconds.

“There were a few options, but you had to take risks – I tried to mimic Harry’s round,” explained Robert, who was presented with the Tim Stockdale Trophy in memory of the much-loved rider who died last month.

Last year, Newbridges Chablis hit three fences, but Robert, whose aim for 2019 is to get into the Young Rider team, explained: “He’s quite a sensitive horse and he didn’t settle well in the stable, but he’s had some more mileage since then and things were quite different this time.”

Eight riders went through to the jump-off. Jodie Hall McAteer’s spirited challenge on Fantom, clear in 31.1 seconds, was good enough for third place behind Charles, whose brilliant year continues.