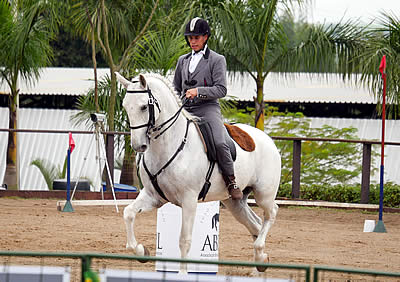 Itapira, SP, Brazil (June 7, 2017) – May shows brought top finishes once again for Interagro Lusitanos of Brazil, where the horses and riders of the prestigious stud and training facility based in Itapira, Sao Paulo dominated in a variety of disciplines from FEI dressage to working equitation. In what has already been a banner year for Interagro, their team shows no signs of slowing down and only seems to be building more steam with bigger competitions and better results each time they venture off the 1,300 acre home farm. With the vision of developing a modern Lusitano sporthorse from the purest Portuguese lineages, Interagro strives through meticulous breeding, training, and exportation to preserve the ancient breed’s future in modern FEI sport.

At the 36th Annual International Lusitano Show, held May 25-28, 2017, Interagro’s team and horses bred by the Brazilian stud excelled in dressage and working equitation. Exclusively showcasing the athletic talents of the Portuguese breed, the International Lusitano Show is a benchmark for the breed in Brazil, attracting only the best horses and riders from around the country and featuring nationally ranked and FEI classes. A rising star in Interagro’s barn, Fellini Interagro’s poise and performance earned him top honors in the 7-year-old division as part of the National Dressage Championship (CDN). Under the guidance of Pia Aragao, Fellini’s winning score continues his winning streak from his 2016 6-year-old season, and under the new FEI judging he is currently the top ranked 7-year-old in Brazil. Aragao also rode Hamilcar Interagro to a third place finish in the 5-year-old division as part of the Sao Paulo Dressage Championship. Hamilcar, who was sold during the 13th Interagro Yearlings Auction in 2012, is owned by Martina Irene Brandes, head trainer for Interagro.

Fellini Interagro is the first and only dressage horse to reach this level under Brazil’s federation ranking. Aragao, who has been his prime trainer throughout his career, stated that the combination of technical and traditional FEI judging, which is new to Brazil this year, was a challenge for the pair, and Fellini rose to the occasion beautifully: “I was very pleased with him overall; for a young horse he performed super well and with a bit more time, experience, and polish I’m confident Fellini will truly shine.” She also elaborated on Hamilcar’s performance, saying, “Hamilcar is such a joy to ride, with a wonderful canter as well as amazing talent for collection and engagement.”

To round out their month of May dressage success, Team Interagro prefaced their impressive performance in dressage at the International Lusitano Show with corresponding wins and top placings at the 3rd phase of the SHP Dressage Ranking, held May 13 at Sociedade Hipica Paulista in Sao Paulo. Among the most impressive performances were Pia Aragao and Zepelim Interagro, whose score of 63.525% in the FEI Grand Prix earned them 3rd place. Aragao also took out Fellini Interagro in the 7-year-olds, where he won the class with a final score of 7.88. Edmar Brito and the enigmatic Herodotus Interagro danced their way to second place at Second Level with a 64.848%. Brito also rode Hadrian Interagro to 3rd place in First Level with a 63.796%. Herodotus, who was sold just one day before his performance at the Ranking, has recently arrived in the US to begin his career with his new owners.

Aragao went on to note that all of her horses and pairs of riders from Interagro’s team have had a spectacular May season of dressage. “Zepelim stepped up to put in an excellent show in May. I was really pleased with him, and to have him back in the ring after a break. All of Interagro’s horses and riders showed great improvement, especially in an environment that is challenging for young horses and stallions. As they continue to improve and build on their technical skill and concentration, the horse’s athletic ability and poise in the arena will be even more apparent.”

Originally from Sweden, Aragao trains with Stefan Jansson and wrapped up a clinic with him on May 24th. “Stefan comes here regularly, about 4 times a year. He was thrilled with Fellini’s progress, his maturity, how easy he learns, and is able to perform what we ask of him. Zepelim is also stronger than ever, showing fantastic piaffe, passage, and transitions. The pirouettes are also very good and his elastic half-passes show impressive impulsion and crossing. With a few more trips to build confidence and concentration, Stefan and I are confident he will be a very solid competitor, and it’s exciting to see him succeed as we have been working with him since he was 5 years old!”

Interagro’s passion for working equitation also shone through in their performances at the International Lusitano Show. Empreiteiro and Edmar Brito rose from their 3rd level dressage victory to earn reserve honors in the Preliminary Division, marking the versatility of the Interagro horse. Alexandre Souza and Hector Interagro won the Novice A division; Souza also rode the impressive Eros Interagro to third place in the Novice B division and Feitor Interagro to 4th in the Preliminary division. Feitor, a coming 8-year-old, is the youngest in the division, competing against much more seasoned horses; Eros Interagro, who stands at 16.3h high, demonstrates the agility and athleticism of the Interagro Lusitano. More Lusitanos bred by Interagro also finished in the ribbons, with Dorus Interagro, who was sold at the 2011 Interagro Collection Auction, taking second, and Porfirio Interagro, who was sold at the 1997 TOP Interagro Auction, taking third in the Intermediate division.

While working equitation and dressage are fortes of Interagro’s team, the week before Antonio Souza, Fabio Silva, Valentim Brito, and Ana Carolina Borja took the reins of single and four-in-hand Interagro horses at the 2nd phase of the 2017 Brazilian Driving Championship, held May 20 at Club Hipico Quinta da Baroneza. Souza and the powerful Hospedeiro Interagro blazed to victory in the Single Cones division, while Silva and Canaletto Interagro took second. Brito guided Herbert Interagro to third to secure Interagro’s 1-2-3 victory in the division. Borja and her team grey Lusitanos, which include Viajor Interagro, Semaneiro Interagro, Erva Doce do Top, and Erotica do Top, owned by Alvaro Coelho da Fonseca, proved their proficiency over the tricky four-in-hand cones course, taking first in the Open division.

During the 1st Phase of the Brazilian Driving Championship, held May 8, 2017 at Clube de Campo de Sao Paulo, Interagro’s horses once again dominated, this time in dressage as well as cones. Silva and Canaletto finished first with a 78.87; Souza and Hospedeiro finished second with a 72.90; Brito and Herbert finished third with a 72.31. The cones also saw Souza and Hospedeiro as champion, with Silva and Canaletto in second and Brito and Herbert in fourth. Borja also dominated the four-in-hand cones with Viajor Interagro and Semaneiro Interagro in the harness.

For more information on Interagro Lusitanos, Interagro’s horses for sale, or the Lusitano bloodlines, visit Interagro’s website at www.lusitano-interagro.com. To organize a trip to Brazil or for any questions regarding sales or the logistics of importing horses to the US, contact their US Sales Representative, Peter van Borst, at 817 368 9447.