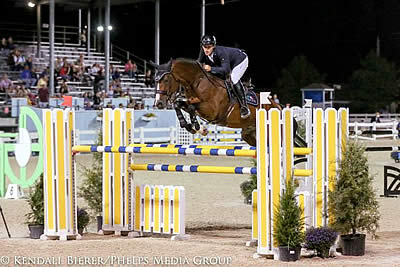 Devon, Pa. – Sept. 17, 2016 – Embracing the roar of applause from the grand stands, Mattias Tromp smiled and gave a well-deserved pat on the neck to his mount, Avon, after winning the $25,000 Devon Fall Classic Saturday night. The duo led the victory gallop around the historic Dixon Oval after laying down a double-clear effort and impressive time of 39.206 seconds that sealed the win.

Twenty-two competitive horse-and-rider combinations vied for the $25,000 purse, and only seven qualified for the main event’s jump-off round. The top six riders had double-clear efforts, and just tenths of a second separated the second, third and fourth place finishers.

“It is pretty cool,” the North Salem, New York native said about winning at Devon. “It is sensational. I don’t have many words. It is an amazing feeling.”

Tromp and his 12-year-old Swedish stallion were the final pair to contend for the title. The crowd held their breath as he made the final turn, let out a sigh of relief when he cleared the final jump and collectively cheered as he looked to the clock and saw he beat Brooke Kemper by a second.

Beaming with gratitude, Tromp said, “I have to thank McLain Ward again for pairing me up with this horse. I’ve only had Avon since April, and we bought him and immediately started going to horse shows. I got to know his strengths and weaknesses quickly, and I think that has paid off for sure.”

The duo earned the victory in Friday night’s $5,000 Speed Stake, and has plans to take their talents to the indoor circuit this fall.

“I absolutely feel more prepared for Indoors,” Tromp explained. “This ring, this atmosphere, made me feel like I can really trust this horse under spookier circumstances. Going forward to Indoors, I know I won’t have to change my ride. Hopefully I can stay the same, and he will go the same way out there.”

Kemper had just stolen the top spot of the leaderboard from Laura Chapot, before Tromp entered the ring and bettered her effort to take the top spot.

“When I looked up and saw that I was a little faster than Laura, I was thrilled,” Kemper said. “She has a great horse that has done well for her. That is a super horse that Matt’s got. I thought he might be faster than he looks, and he was.”

Kemper beat Chapot by one-tenth of a second, earning the red ribbon with Classified in 40.382 seconds.

Chapot earned third and seventh place honors in the class. She had the initial ride in the speed round aboard Out of Ireland and incurred four faults in a time of 39.828 seconds, but returned aboard Thornhill Kate to trip the timers at 40.404 seconds, laying down a faultless effort.

Amanda Flint attempted to edge out Chapot, but fell two-tenths of a second too short, settling for fourth place with VDL Wittinger in a time of 40.606 seconds.

The fifth place honor was awarded to Linda Sheridan and Vantina HPF. The duo went clear and clocked in a time of 41.654 seconds. Conor O’Regan took home the sixth-place ribbon aboard Barlando with a time of 42.747 seconds.

The crowd enjoyed watching the competitors attempt a technical Paul Jewell-designed course that challenged the riders.

“The class worked out great; the horses went around fabulous,” Jewell said. “It was a fast jump-off. It let them gallop two long gallops on the course, and take a little bit of a risk to the in-and-out, and still protect themselves. It was exciting for the crowd, as well as me. They all jumped great.”

He continued, “It was fabulous. Whenever I can build a grand prix with a nice jump-off, and all the horses go home safe, I am really happy.”

“Frank [Chapot] was a great mentor of mine,” Jewell explained, as he expressed his gratitude for the opportunity to design the course for a class held in the memory of the late Frank Chapot. “He was the one that convinced me to get my license. It was an honor to do this.”

Earlier in the evening, the spotlight was on Adrienne Marciano, who not only earned first and second in the $7,500 Show Jumping Hall of Fame High Junior/Amateur-Owner Jumper Classic, but also the champion and reserve honors of the division.

“I just got chills thinking of that (winning in the Dixon Oval),” Marciano shared. “There is a crowd out here in the evening, and the atmosphere at Devon is always awesome. I am just really happy.”

Only three horses qualified for the speed portion of the class, and Marciano was in the irons of two of them. She tackled the course aboard Canoso first and with a double-clear effort, set the time to beat at 35.093 seconds. She duplicated her effort aboard Laspari, besting her first go and breaking the beam in 34.636 seconds. Saly Glassman and Z Adermie 56 were the only other pair to qualify for the jump-off, settling for third place with a time of 41.911 seconds and four faults.

“Laspari is amazing,” Marciano smiled. “He can do anything with his body, and he gets me out of some ridiculous situations. I adore him. I love him, and I cannot say enough good things about him. He is a really good guy, and we are a perfect match.”