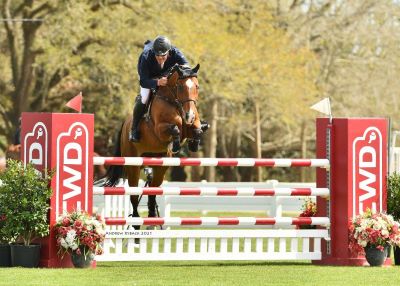 The first round time allowed was set at 86 seconds. Only nine horse and rider teams qualified for the jump off which was led by Gianna Aycock of Argyle, Texas and her own Flex A Tia. The pair earned eight jump faults and posted a time of 41.920 seconds.

Reid Rickett of North Port, Alabama and his own Banderas De Bornival followed in the jump off round order of go and earned four jump faults in a time of 43.799 seconds. The pair would finish in sixth overall.

Laura Conway of Little Rock, Arkansas and her own Ceralena were the next in the order of go and were the first to turn in a clear jump off round in a time of 48.931 seconds which took the lead and set the new time to beat.

Happy Comly of Sasche, Texas and Comly Sport Horses’ Clock-Wise CSH followed in the jump off order, but with eight jump faults in a time of 42.156 seconds would see the pair finish in ninth overall.

CHS Krooze, owned by Loretta Patterson and ridden by Holly Shepherd of Grand Bay, Alabama, followed in the jump off order and turned in a clear jump off round in a time of 42.189 seconds, which took the lead and set the new time to beat.

Matt Cyphert of Argyle, Texas was up next with his own Lochinvar. “There were so many fast riders and horses in today’s Prix,” said Cyphert. “When Holly [Shepherd] went before me and I saw her time, I just started laughing. She and Krooze were so fast! I know my horse is fast, but I didn’t think I could beat her,” he said.

As it turned out, Cyphert and Lochinvar turned in a fault-free jump off round in a time of 41.884 seconds, taking the lead and moving Krooze and Shepherd into second place.

Cyphert commented, “The course went all over that beautiful grass field and it was really fun to ride. The triple combination was pretty early in the course and it was an early test. It caught a few people. The vertical after the triple combo going away from the gate was a little tall and caught some too,” he added. “It walked really nice but there were some questions which we weren’t really expecting,” he said. “It was a fair course, but rode tougher than we walked it.”

Alexandra Ansteth of Spring, Texas in the irons of August Pines Farm’s Mandras Van De Pannehoeve followed in the jump off order, but four jump faults in at time of 44.955 seconds would see them finish in seventh place overall.

Argyle, Texas’s Julie Cleveland Beam in the irons of Anastasia Stewart’s Lancelot were the next to go in the jump off round, but four jump faults in a time of 42.259 would award them the fifth place ribbon.

Shannon Hicks of Lake Saint Louis, Missouri and Helen Gilbert’s Emir D sat in the enviable last to go position. Although the pair turned in a fault-free round, their time of 47.841 seconds would see them finish in third place overall.

Cyphert commented, “Paul really knows how to get the best out of that field and builds for long gallops and places to be quick. The last line in the jump off round walked an 11 and many of us did 9 – we left a full two strides out! The footing is that good. After four weeks, it’s [the grand prix field] riding that well,” said Cyphert.

Cyphert said, “When I headed out today after the show, this couple came up to me in town. They know me from years of showing here at the Gulf and they were so excited to hear that we won. This show is so unique that way. Everyone is so friendly, the locals know the riders and their horses, the place is beautiful, and it’s one of our favorite shows of the year,” he said. “It was great to see so many Texans here this week too. It wasn’t an organized thing, but there’s a good group of us here. We’re really supportive and in all honesty, we were all rooting for the Texas folk,” he laughed.