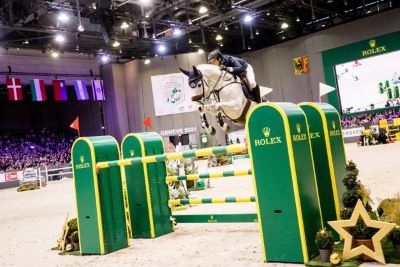 The world’s elite competitors gathered at the Palexpo arena for the Geneva International Horse Show, of which Rolex has been the Main Sponsor since 1996. The event, steeped in history and celebrating its 60th edition in 2021, is traditionally a showcase of precision and consistency, qualities demonstrated in abundance by Fuchs in Switzerland over the weekend, and reflected in Rolex’s own commitment to perpetual excellence in its watchmaking and all other endeavours.

The winning combination highlighted the critical importance of harmony between horse and rider, how trust and communication are the foundation of any successful partnership and the ability to push beyond the known limits of performance.

The demanding first round set by world-renowned course designers Gérard Lachat of Switzerland and Louis Konickx of the Netherlands saw just six of the 40 starters head through to the jump-off. First to go against the clock, Ireland’s Darragh Kenny set a fast but beatable time, leaving the door open to those who followed. Fuchs was next to go and produced a precision-perfect round aboard the nine-year-old Leone Jei, setting the time to beat of 41.54 seconds, almost two seconds faster than Kenny.

Rolex Testimonee Kent Farrington followed Fuchs into the arena, and put in a fearless effort, shaving 0.19 seconds off the time, only to accrue four faults at the very last fence. Those that followed were unable to match the accuracy and pace of Fuchs, with Harrie Smolders from The Netherlands and Max Kühner from Austria finishing second and third, respectively.

Commenting on his win, the Swiss rider said: “It’s absolutely fantastic to get my second victory here in Geneva. Leone Jei jumped great in both rounds. I knew that the jump-off suited me very well; I knew that I could leave out strides and that it would be difficult for my colleagues to do the same because Leone Jei has such a massive stride. I’m delighted to once again be the live contender of the Rolex Grand Slam of Show Jumping.”

Equestrian fans will now eagerly look forward to the next Major, The Dutch Masters in March 2022, when Fuchs will be the live contender for the Rolex Grand Slam of Show Jumping, the sport’s ultimate challenge that rewards any rider who wins three consecutive Grand Prix at the four Majors.