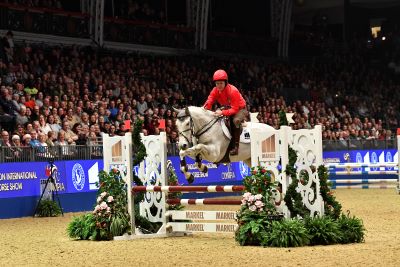 The Markel Jockeys Jumping in aid of The Injured Jockeys Fund will be returning to The London International Horse Show for the first time since 2019, featuring some of the most prolific jockeys of Great Britain and Ireland. Back by popular demand, this competition sees jockeys attempt a show jumping course at the famous London Horse Show – often with hilarious results. The 2022 competition will be a girls versus boys format and takes place on the evening of Monday 19 December.

Heading the boys’ team will be 20-time champion National Hunt jockey Sir Anthony ‘AP’ McCoy, who will be seeking to reverse the 2019 result, in which the girls were victorious. From the world of Flat Racing will be Jim Crowley, who started his professional career over fences riding for the stable of show jumping legend Harvey Smith. Since his switch to the flat, Crowley has been crowned champion jockey and won many of the world’s most prestigious races, most recently the Group 1 Juddmonte International Stakes last week aboard Baaeed, currently the highest rated horse in the world.

They will be joined by 2021 champion National Hunt jockey Harry Skelton, son of Olympic double gold medallist Nick Skelton CBE. Skelton will be looking to reclaim the title he won in dramatic circumstances following a bridle malfunction in 2018. Skelton’s wife, Bridget Andrews, will be a pivotal part of the girls’ team, following a successful performance in the 2019 edition. Andrews, a Cheltenham Festival winner, will be seeking to make it a double over her husband, this time at the iconic ExCeL London.

Another husband-and-wife combination likely to go head-to-head at The London International Horse Show will be flat jockeys Tom Marquand and Hollie Doyle. Doyle will head to The London International Horse Show on the back of another record-breaking season, during which she claimed her first Classic win in the French Oaks, becoming the first British female jockey to win a Classic. Doyle holds the record for victories in a single season by a female rider in the UK and will be looking to add to her list of accomplishments in London. Marquand, also a Classic winner having won the St Leger Stakes in 2020, will add to the stellar list of jockeys taking part in the class, described by Clare Balding in 2019 as “the most extraordinary sporting event I’ve ever seen,” with more top-class participants to be announced in due course.

Looking ahead to the 2022 event, McCoy, President of the Injured Jockeys Fund, said: “At one of our previous appearances in the Markel Jockeys Jumping at The London International Horse Show, Olympic gold medallist Nick Skelton resorted to using a cable tie to fix the bridle on Harry’s horse, so let’s hope we are a bit more professional this time around!” He continued, “At our last appearance in 2019, we were beaten by the girls, so we’ll be putting that right this year. In all seriousness though, it’s for a great cause in the Injured Jockeys Fund – and we all love taking part.”

Juliet Redfern, Head of Equine Insurance at Markel, added: “Markel is delighted to be sponsoring this fabulous event, as a specialist equine insurer we are committed to supporting the wider equine industry through various charitable initiatives. We have supported this particular event for six years; it’s great fun, but more importantly provides crucial funds to the Injured Jockeys Fund, a wonderful charity that looks after its own so well.”

The Markel Jockeys Jumping in aid of the Injured Jockeys Fund will be part of the Show’s thrilling final session, which also includes the five-star London Grand Prix, featuring the finest international show jumping horse and rider combinations.