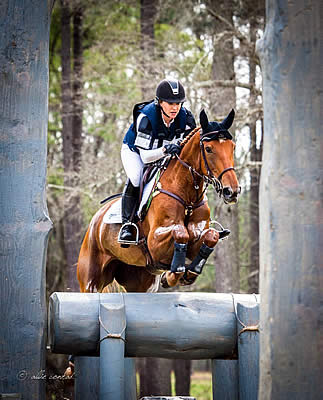 Marilyn Little and RF Demeter made a steady, if unexpected, climb to the top of the leaderboard at the Carolina International CIC3* and Adequan USEA Gold Cup/PRO Tour Series.

Little and “Demi” (Rubin-Royal/Patricia) weren’t the pair to beat until they clocked one of only two double-clear rounds on Hugh Lochore’s cross-country course, where time was of the essence.

“I planned to start the course on both horses [including RF Smoke on the Water] as if I was going for time,” Little of Frederick, Md. said. “I was hoping they were fit, and depending on how they were jumping and galloping, reevaluate at three or four minutes and see how they felt.”

Little explained that the 12-year-old mare, who finished on her dressage score of 46.2, had a big of an unconventional winter this year, since Little had an extended stay in Europe to work on the jumper side of her business.

“She spent so much time in quarantine, so whereas a lot of horses can get let down, have their shoes pulled and go out in the field, she spent it in quarantine,” said Little. “It was hard on her. She lost weight and condition. She hasn’t seen a dressage saddle until a few weeks ago.”

On her decision to stay in Europe last year after a solid showing at their first CCI4* at Pau, Little explained that it was partly a financial decision, and partly a strategic one.

“I have a lot of jumpers in Europe and primarily my business is jumpers still, so it was a financial decision. The decision to keep the eventers there – I really wanted to get my eventers in front of those ground juries,” she said. “You don’t want them to think ‘here’s the letup rider,’ and they won’t give you those points unless they know you, I think. That’s why we’re trying to expose the [American] riders to those [European] competitions, and those competitions’ judges to our riders.”

Little was certainly thrilled with Demi’s performance, especially since it was her first outing this year aside from a few horse shows in Wellington, Fla. She explained that her mare is typically fast, covers the ground efficiently, and it easy to make time on.

Second-placed Buck Davidson explained that his veteran ride, Ballynoe Castle RM, also had a less-than-ideal winter season. After a bizarre bone bruise in his stifle, probably from laying down in his stall, to a bout of pneumonia, “Reggie” missed several weeks of his winter training.

Regardless, the 14-year-old gelding had the best heart rate and temperature in the vet box of the 40 cross-country starters.

Read the rest at www.useventing.com.