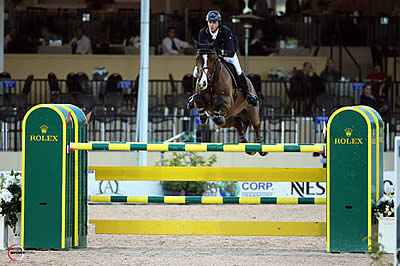 Wellington, FL – February 6, 2014 – Week five of the 2014 FTI Consulting Winter Equestrian Festival (FTI WEF) continued on Thursday afternoon with a shared victory for Ben Maher (GBR) aboard Urico and Tiffany Foster (CAN) riding Victor in the $125,000 Ruby et Violette WEF Challenge Cup Round 5. Held in a “California Split” due to the large number of entries, the competition awarded two sets of placings, each with $125,000 distributed.

Great Britain’s Robert Ellis set the course for the $125,000 Ruby et Violette WEF Challenge Cup Round 5 on Thursday in the International Arena at PBIEC. The class saw a record total of 116 entries in round one with 30 clear trips to narrow the field down for an impressive tie breaking jump-off. Twelve entries jumped clear over the short course, and Ben Maher had the fastest time of 43.44 seconds overall for the win in Section A of the class riding Jane Clark’s Urico. Tiffany Foster and Victor, owned by Artisan Farms and Torrey Pines, finished in 44.04 seconds for the win in Section B.

The top three finishers in Section A included Maher and Urico, Reed Kessler (USA) and Kessler Show Stables’ Ligist in second with a time of 44.11 seconds, and Eric Lamaze (CAN) with Artisan Farms’ Zigali P S in third in 44.93 seconds.

Section B saw a top finish for Foster and Victor, with Beezie Madden (USA) and Abigail Wexner’s Cortes ‘C’ in second with a time of 44.79 seconds, and Wilton Porter (USA) and Sleepy P Ranch LLC’s Paloubet in third in 44.96 seconds.

Jane Clark’s horses had a fantastic day on Thursday with Urico and Cella both qualifying for the jump-off and having great rounds. Urico got the win and Cella had one rail over the short course and finished seventh in Section B. To add to the success, Clark’s dressage horse, Wellnetta, earned an FEI Grand Prix 3* victory across the street at the Adequan Global Dressage Festival with U.S. rider Katherine Bateson Chandler earlier in the day.

Although Clark could not be in Wellington for the day’s top finishes, Ben Maher was happy to be a part of the winning team. He explained that he has made some adjustments to how he rides and prepares Urico since last year, and the changes seem to be working for the best.

“Urico was fantastic today,” Maher stated. “We spent a long time building him up since this time last year. I had a couple of accidents on him and now we really pinpoint him for certain classes. We don’t use him as much, but if we do it the right way, he is a great horse. It is looking like it pays off. He jumped a good first round, and I was lucky enough to have two in the jump-off. Cella jumped phenomenally in the jump-off and I just sliced the liverpool way too much. I thought she was a machine, not a horse I guess, so it reminded me I have to pay attention a bit more. On Urico, I had to ride a little bit wider there knowing that sometimes he gets a little afraid. He is naturally such a fast horse, so as soon as that was out of the way, I ran him to the end and luckily he was just a lot quicker.”

“Whatever I was doing this time last year, I am doing the opposite now pretty much,” Maher said. “He wanted to run quite close to the jumps and sometimes that caused him to panic a little bit, so I have worked him much differently. He gets a lot more work now in the mornings for preparation for the afternoon so that he is a bit quieter. I also tend to ride him with a little more space to the jumps so he does not have that moment of freezing up at the end. He is a very sensitive horse, so when he is confident, I am confident, and then hopefully the results come. That is the plan.”

Maher commented on the course for Thursday’s class, noting that it was one of the most challenging that he has seen yet at this year’s competition.

“I thought Bob Ellis did an amazing job,” he stated. “Where do you begin to start to build a course for 116 riders? It wasn’t perhaps the biggest we’ve ever seen, but Bob is clever. He places jumps on angles and rollbacks. He catches people out everywhere. That is probably what we haven’t seen yet here this season. There has been a lot of galloping, but not actually many real turnbacks and opportunities to cut across the fences. It was definitely the most testing course we have had here this year.”

In addition to the prize money in Thursday’s class, Maher earned a special $3,000 bonus as part of the SSG ‘Go Clean for the Green’ promotion for wearing his SSG ‘Digital’ Riding Gloves. Each week of the Ruby et Violette WEF Challenge Cup Series, a $3,000 bonus will be awarded to the winning rider if they are wearing SSG ‘Digital’ Riding Gloves in all rounds of competition with the SSG logo clearly visible.

Tiffany Foster and Victor continued their successful FTI WEF circuit with their second big win after also topping Section B of the $34,000 Ruby et Violette WEF Challenge Cup during week three. Foster was very happy with her rounds on Thursday and explained that she has gained confidence with their accomplishments.

“He was awesome,” Foster noted. “The course obviously was difficult enough with so many entries in it, and I thought he jumped really well. He is really confident and comfortable here. He is really fast and now it is getting really fun because I can go really fast with him. I have to give all of the credit to Eric (Lamaze) though because since Barcelona last year, I don’t jump Victor at home anymore, only Eric rides him. He does all the work and I get all the credit, but it’s working so I’m going to make him keep doing it!”

In addition to Victor, Foster has many great horses to show this year thanks to the support of Artisan Farms, and she is having a lot of fun with them as well.

“I am always having fun, but I am especially having fun jumping like this when you can go fast,” she stated. “Once you get on a roll it seems like you get some confidence, and then you are really prepared to take some risks. Then when the horses rise to you, it is really awesome. I have a super group of horses, and I have to thank the Zieglers and Artisan Farms because they are unbelievable owners. I am really happy that I am able to now have it all start to pay off.”

The Loddon Stalls Pre-Green Hunter Level 1 division was split into two sections on Thursday afternoon at the FTI WEF to accommodate the division’s large amount of entries. Jimmy Torano piloted Kyle Owen’s Messick to top honors in Section A and also finished as reserve champion with Pearl Street, owned by Jamie Jarvis. In Section B, Scott Stewart was awarded the division champion title with Wish, owned by Stewart’s Rivers Edge Farm and Annette and Leslie Pierce. The reserve champion for Section B was Palani K, ridden by Jeff Gogul and owned by Fred White.

Torano and Messick won three over fences classes in addition to jumping to a fourth place finish. Stewart and Wish were second, sixth, and first over fences and won the under saddle class.

Torano and his two mounts were matched up at the last minute after their usual rider, Peter Pletcher, had to take the week off following a minor injury. Pletcher of Magnolia, TX, asked Torano to step in and Torano and was pleased with how the seven-year old Westphalian gelding performed in the ring Thursday.

“It’s a horse [owner Kyle Owens] bought off the internet that doesn’t have a lot of experience, but the horse went fantastically this week and won three classes. It really looks like a nice horse for the future,” Torano, of Ft. Lauderdale, FL, noted.

Coincidentally, Torano helped Pletcher with Messick a few weeks before temporarily taking the reins over on Messick, so he didn’t have to go into Thursday’s division completely blind.

“I watched [Messick] go a little bit. He’s a typical hunter. He goes without a martingale; he goes in his own frame with nice balance. He’s got a great way of going. Luckily I got to watch him go with Peter and Kyle two weeks ago,” Torano explained.

Torano’s first impression of the horse proved to be true. He described Messick as an even-tempered and simple ride, relatively unaffected by the busy show atmosphere.

“He’s very, very easy-going. He’s not spooky. He’s very careful and has a perfect lead change,” Torano remarked. “A golf cart was coming by the side [of the ring day on day one of competition for the division] and he maybe shied away a little bit, but he was third in that class and he won the other one. Today, he went in there and was solid and won them both.”

While Torano and Messick were freshly matched, Stewart and his champion mount have a much closer history. Stewart and partner Ken Berkley own Wish with Annette Leslie Pierce and bred the four-year-old Warmblood gelding themselves.

“He’s is the first one that’s old enough that we bred. He’s out of a mare we had called Hush and he’s by a stallion I used to show, Be Cool,” Stewart detailed.

When asked what it’s been like to bring along a homebred mount, Stewart replied with a smile, “It’s been fun. He’s a lot like his mother and his father combined. He’s sort of like a 50/50 mix. He’s really brave and easy. He has a really good lead change, and he’s just simple.”

The first time Stewart got on Wish, he fell in love with his natural way of going and admitted he didn’t have to do much on the flat training-wise.

“He’s a beautiful mover and a beautiful horse. The way he canters in between the jumps, he just carries himself like a natural hunter and he wants to carry himself in that frame,” Stewart described.

Wish has also remained cool and collected despite the fifth week of the FTI WEF only being his third show. For that, Stewart credited his incredibly easy-going personality. That doesn’t mean the gelding is immune to any “green” moments, which Stewart simply laughed off.

“Putting the ribbon on his bridle scared him a little bit!” Stewart commented of the pair’s division championship presentation.

While Wish will take the next few weeks off before returning for the USHJA Pre-Green Incentive Program classes to be held Week 7 of the FTI WEF, hunter competition continues on Friday with the WEF Collegiate Equitation Championships. The $34,000 G&C Farm 1.45m will be featured in the International Arena. For full results, please visit www.showgroundslive.com.