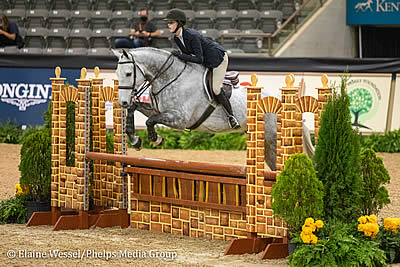 Lexington, KY – October 23, 2020 – The 2020 National Horse Show (NHS) began Friday, October 23, returning to its home in the Alltech Arena at the Kentucky Horse Park for its 137th year of top competition. As the oldest indoor horse show in America, the National Horse Show is a major fixture on the national and international equestrian sports calendar. Now in its third year, the Opening Weekend highlights age-group equitation classes and two championship events, the Taylor Harris Insurance Services National Horse Show Adult Equitation Championship and the Hamel Foundation National Horse Show 3’3″ Equitation Championship, over the course of three days. In the Pérez & Bennett 16-17 Equitation division, Madison Olvert stood out as the big winner of the day, riding to back-to-back blue ribbons in Section A of the split division aboard her own Green Book. In Section B, Kennedy Duke and her own Galan led the way thanks to two top-three results.

Friday brought the first over fences round of divisions ranging in height from 2’6”-3’3” and under saddle classes, with a number of exhibitors earning coveted ribbons from judges Keri Kampsen and Chance Arakelian for equitation excellence. Kicking off the Pérez & Anne Bennett 16-17 Equitation division, Section A competitors took center stage following the Pérez & Bennett Under 14 and 14-15 Equitation divisions earlier in the morning. Olvert and Green Book jumped to the top of the leaderboard as the early frontrunners ahead of 30 competitors thanks to a stellar over fences round that earned them a first-place prize, and the partnership later returned to the ring to add to their success. Under saddle, Olvert and Green Book once again shone the brightest, nabbing the top honors ahead of a hotly-contested flat class to kick off the horse show on a high note and conclude the day as the division leaders.

In Section B, 29 entries attempted to demonstrate accuracy and precision over the 10-fence course, and in the end Duke bested the pack with the ride on Galan following an exemplary trip that kept them at the head of the talented class to earn invaluable points towards the division championship. Duke and Galan once again impressed with a third-place finish under saddle, but were bested by Courtney Craver and her own Kentucky Ter Doorns, who walked, trotted, and cantered straight to first place in the class. Duke and Galan will aim to maintain their status as the division frontrunners Thursday with the final over fences class.