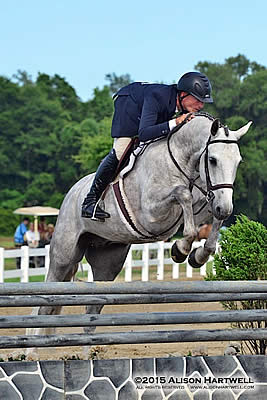 The Hunters LOVE to showcation at the Charleston Summer Classic!

Thirty-four horse and rider teams took to the hunt over the course designed by Classic Company’s Joe Carnicum before a sold out VIP tent and it was Timothy Maddrix of Birmingham, Alabama who won the class with Alina Dumitrescu’s Shutterbug.

“The trap jump just came up dead wrong and he looked to take the step out and I looked to put it in and he just stopped,” commented Maddrix.

“Shutterbug was awesome,” said Maddrix. “I haven’t had him long; I just got him in Conyers. He is a warmblood coming seven and has done a lot of jumper classes,” Maddrix said. “That was the first time in the Handy that he went like a hunter and his first Derby win! He was awesome; he turned well, was quiet and jumped amazing,” he said.

“Joe [Carnicum] did a great job with the course,” commented Maddrix. “It was really fun and gave you a lot of options with inside turns and allowed you to separate yourself from the crowd. The course was pretty perfect being very technical, yet providing options.”

A first round score of at least 78 was the magic number for those seeking a Handy opportunity. After turning in a first round effort with a total score of 78, Isabella Rand’s Silver Stone, ridden by Lauren Marcinkoski of Hardeeville, South Carolina, was the first to go in the Handy round and scored a 62. Their total score of 140 would see the pair finish in ninth place overall.

Charles Harfield’s Hidden Creek’s Tango, ridden by Christina Jason of Aiken, South Carolina, followed Silver Stone. Their first round score of 79 and second of 81 would see the pair finish in fifth place overall with a total score of 160.

The third horse to return was Sophia Stouse’s Elder, ridden by Livia Steffee of New Orleans, Louisiana. Their first round score of 79.75 combined with their second round score of 80 would see the pair finish in seventh place overall with a total of 159.50 points.

DS Holdings, LLC’s DSH Anka, ridden by Whitney Owens of Windcrest, Texas, followed in the Handy round and turned in a score of 79.75. Combined with their first round score of 80, the pair would finish in sixth place overall with a score of 159.75.

Petrossian, owned and ridden by Whitney Miller of San Antonio, Texas, had a first round score of 80.5. However, they were eliminated in their second round and subsequently placed twelfth overall.

Isabel Coleman of New Orleans, Louisiana and her own Antwerp placed third overall after earning a first round score of 81 and second round score of 84 for a total of 165 points. Coleman was also the recipient of the Kastel Denmark Hunter Style of Riding Award.

Lynn Seithel of Wadmalaw Island, South Carolina and her own Versace earned scores of 83 and 44, respectively, and their total of 127 would see the pair finish in eleventh place overall.

Julie Curtain of Woodstock, Georgia and Jennifer Munday’s Samaritan returned for their Handy round after earning a first round score of 89. Their second round score of 76 gave them a grand total of 165 points which earned them fourth place overall.

Frankie Owens of San Antonio, Texas piloted DS Holdings Carrida to a first round score of 84 and second round score of 81. Their overall total of 168 would see the pair finish in second place overall.

How did Maddrix feel about the award presentations with the firefighters from the Charleston Animal Society’s calendar? “I really think I should have flexed my muscles with them but I didn’t want to scare them off,” he laughed. “And for the record, they also wanted me to be in the calendar for next year but I declined,” he joked.

Tim Maddrix loves the Charleston Summer Classic! “I’ve been to Kiawah Island, went to the ocean, went to Seabrook the second day and now we’re horse showing. After tonight’s prix, we’ll probably hit the pool at the Seabrook Club and then after the show tomorrow, go back to the beach!” he said.

Official Restaurant Partner CRAVE, catered the VIP dinner sponsored by the Seabrook Island Equestrian Center and all dined on a fabulous dinner along with an open bar sponsored by Tito’s Vodka.

The VIP was HOT HOT HOT! The Charleston Summer Classic’s Official Charity, the Charleston Animal Society, was on hand promoting their 2016 calendars which feature the hottest fireman in South Carolina and rescued animals.

Everyone had an opportunity to pre-purchase a calendar and pose with the firefighters and, to say the least, a good time was had by all! For those that missed it this week, the Charleston Animal Society will be back next Friday from 6-7:30 pm during the $35,000 Devoucoux Grand Prix.