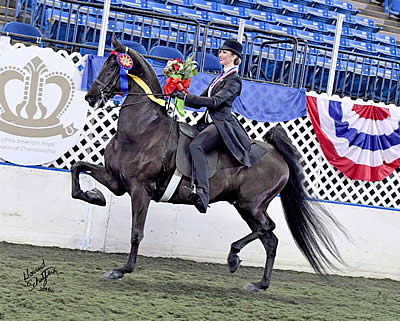 “I had to work really hard; you only get one shot at the Triple Crown. This has been something I wanted since I was five years old and knew what equitation was about,” said Miles after winning the last leg of the Triple Crown. “I looked up to so many riders above me, including those who won it before me. I worked as hard as I could, and Sarah Barclay, my riding instructor, helped me get through it all.”

Coming into the USEF Saddle Seat Medal Final was not easy for Miles (Rockport, Ind.). She faced immense pressure and stiff competition, joining young women who have been a part of Gold medal-winning Saddle Seat World Cup and Young Rider Teams. She also brought an inexperienced horse, her own six-year-old American Saddlebred, Harlem’s Wild and Wonderful. For this being the gelding’s first year in equitation competition, he fooled a lot of people.

“I don’t think it would have been earthly possible for this horse to come this far in such a short time. My dad has worked night and day with this horse and has brought him to his full potential,” said Miles.

“I thought it was a really great [preliminary] pattern, and it was one everybody could do. There was a lot of transitioning, and I thought riding without stirrups would set me apart from everyone else. I was praying we would get through it, and we did; he did absolutely awesome,” said an excited Miles.

The combination advanced to the afternoon session for additional rail and pattern work, along with 11 other combinations. As the nerves crept up on Miles, she settled down after the first cantering figure eight and trusted her partner to get them through.

“I have been practicing these movements ever since I can remember, and I liked all the elements. He was absolutely great, and he did not let me down,” said Miles.