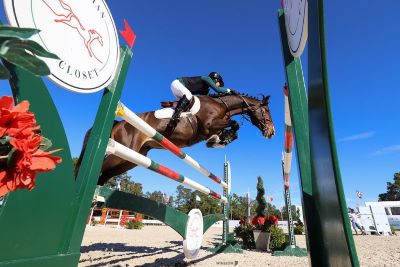 Reutter and Here I Am Z.

Mill Spring, NC (November 23, 2022) – Chilean show jumper Gabriela Reutter of Lumière Horses wrapped up her stellar 2022 show season in North Carolina this fall, jumping her three-horse string to multiple top finishes. In her final competitive appearances of the year, Reutter focused on clean rounds and bolstering the horses’ FEI experience while her top Grand Prix mount, Maharees Rock, rested after the pair’s Bronze Medal win at the South American Games in September. After North Carolina, Reutter plans to move south to Wellington, Florida in preparation for the new year at the 2023 Winter Equestrian Festival.

In addition to her competitive accolades, the hard work of Reutter’s groom Anthony Chavez was highlighted at Split Rock. Billy Lincoln was awarded the Hyaluronex Best Turned Out in the FEI Jog and Chavez received the Annie Goodwin Rising Star Fund Grooms Award.

To date, Gaby is currently the #1 female Chilean show jumper, and her most recent career highlight was a Bronze Medal finish at the 2022 South American Games in Paraguay with Maharees Rock. She also has multiple top finishes in international FEI classes, including her Nations Cup accomplishments, European tour, the U25 Grand Prix divisions, and victory in an FEI 4-star event. She currently campaigns her anchor show jumper, Maharees Rock (a.k.a. Rocky) and a string of sales horses. Her international equestrian CV also includes Spruce Meadows, The Hampton Classic, and several junior/young rider South American Games. She and Rocky were in the top 3 during this July’s Tryon Summer 5 $75,000 Grand Prix CSI2-star, out of 50 entries and top 3 in the $138,600 Turtle Creek Casino & Hotel CSI3* Grand Prix during the 2022 Great Lakes Equestrian Festival. In 2018, Reutter received her certificate of capability for the Pan American Games following a top 3 finish in the FEI 3-star 1.50m Captive One Classic, and has her sights set on representing Chile internationally this winter.