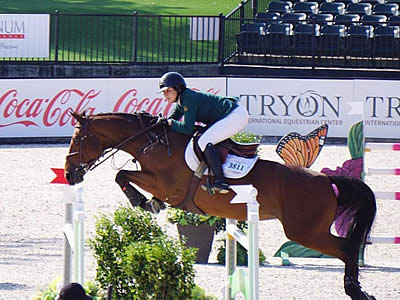 Mill Spring, NC (November 4, 2020) – Gabriela Reutter has been carefully nurturing both her horses’ skills as well as her own at the upper echelons of the sport. In three weeks of showing weeks at Tryon International Equestrian Center, Reutter faced a set of challenges, including a particularly difficult 3-star Grand Prix that rode like a 5-star during the Fall 5 and heavy competition from over 100 horses. Reutter and her mounts stepped up to the proverbial plate to finish their time in Mill Spring on high notes. Both her FEI horses, Atticus Diamant and Maharees Rock, are poised to jump into 2021 at the top of their game.

Maharees Rock (aka Rocky), made a particularly impressive showing at Tryon. The relatively green Irish Sport Horse mare put in a single rail round in the pair’s first ever FEI Ranking class during Fall 4, and had a strong showing in a seriously challenging National Grand Prix during Fall 5. The particularly advanced qualifier left many horses and riders struggling to find their stride, even for seasoned competitors, but Rocky impressed Reutter with her poise and maturity. Rocky also put in a 4 fault round for 13th in Fall 3’s 1.40m Power & Speed, as well as two rails in the 1.45m Welcome.

Both horses jumped Fall 5’s challenging qualifier. The lack of shows during the middle of the year created a high demand for the Fall 5 three-star Grand Prix, and as such the technicality of the course was reflected in the qualifier. Even Olympian McLain Ward commented on the resulting level of competition as less than ideal: “It’s a tough situation. It’s a three-star event, but because of the state of the world and our sport right now, you have over 100 [competing] today,” he analyzed. “To me, that was a 5-star 1.55m track… you saw a lot of horses today who were surprised by it.”

Reutter agreed, stating that while she was impressed with how both horses handled the unexpected complexity, it was definitely a challenge. “This was an especially careful, difficult track. Monty went before Rocky and I wasn’t as aware of how much of a challenge the course would be. I was a bit more prepared after riding the track the first time, and was better able to guide Rocky. Rocky really stepped up and had an amazing go; she was super mature and I’m so impressed with how she handled the track.”

Reutter and her Lumiere mounts will head to Wellington in November, and she has her sights set on the ESP Holiday Series, including a National and 4-star week.

Reutter’s passion for equestrian sport began at a young age, and has since taken her to the upper echelons of show jumping. Combining talent, horsemanship, and dedication to her dreams, she rides with the aspiration of representing Chile at the pinnacle of show jumping sport. Born in Santiago, Chile, Gaby began riding at only four years old. At 17, she moved to the United States to pursue a professional show jumping career. Since 2014, she has ridden under the guidance of Olympic Gold and Silver Medalist Chris Kappler, and is completing her undergraduate degree in Economics and Business Studies at NYU.

To date, Gaby has multiple top finishes in international FEI classes, from the U25 Grand Prix divisions to victory in an FEI 4-star event. She currently campaigns her two show jumpers, Atticus Diamant (aka Monty) and Maharees Rock (aka Rocky), at the FEI level. Both had excellent results during WEF 2020. Her international equestrian CV also includes Spruce Meadows, The Hampton Classic, and several junior/young rider South American Games. In 2018, Reutter received her certificate of capability for the Pan American Games following a top 3 finish in the FEI 3-star 1.50m Captive One Classic.

For more information on Reutter, her horses, and Lumiere, visit www.LumiereHorses.com.