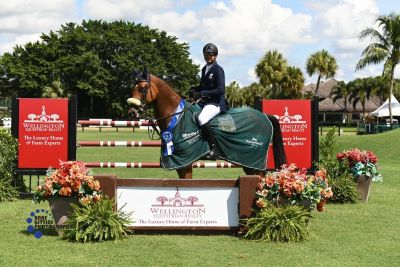 Wellington, FL – Sept. 19, 2021 – The ESP September show reached its pinnacle on Sunday as 23 entries took to the Derby Field for a chance to win the lion’s share of the prize money in the $25,000 Wellington Equestrian Realty Grand Prix. The course, designed by Andy Christiansen (ECU), proved to be a difficult one to master as only three starters advanced to the jump-off, but was no match for the only double-clear contenders of the contest and the class winners, Luiz Francisco de Avezedo (BRA) and Collin, owned by Santa Cecilia Stables. The win is one of many victories earned by the Brazilian and Collin during their longtime partnership, which amazingly began by purchasing the horse before he reached the slaughterhouse.

Competition on the Derby Field kicked off Friday morning with the $10,000 Bainbridge Companies 1.40m Open Steak. Diego Vivero (ECU) and his own entry, Zambia Mystic Rose, sped their way to the top of the leaderboard after clearing the jump-off in 37.15 seconds.

Vivero found himself in the winner’s circle once again on Saturday after topping the Ford’s Garage 1.35m Stake. He and his own Flipper Lady posted double-clear rounds with a jump-off time of 35.74 seconds to take home top honors.

In Sunday morning’s $2,500 Medium Junior/Amateur-Owner Jumper Classic, presented by Equiline, six pairs advanced to the jump-off over the 1.30m fences, led by Catalina Peralta of Geneva, FL on Wendy Peralta’s Amore from Second Life Z. The duo won the class with a double-clear time of 38.85 seconds.

Isabel Beltran of Jupiter, FL and IMB of Jupiter LLC’s Sazerac captured the win in ESP September’s highlight hunter class, the $2,500 USHJA National Hunter Derby, presented by Equiline. The class took place on Friday at Equestrian Village and marked a special occasion for the duo as it was their first derby win together.

In the Amateur-Owner 3’3”/3’6” Hunters, sponsored by Vita Flex, Jennifer Speisman of Wellington, FL piloted her own Totality to the championship honors. The duo earned three first-place results, along with a second place and third place, to secure the highest number of points on the overall scorecard.

The Junior 3’3”/3’6” Hunters, sponsored by #1 Education Place, saw Kat Fuqua of Atlanta, GA and her own Grand Remo ride away with victory in the division after earning three blue ribbons and two red ribbons.