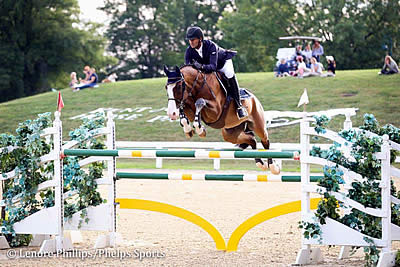 Lexington, Ky. – Aug. 5, 2017 – The conditions could not have been more perfect for an evening grand prix in the Rolex Stadium on Saturday night. The $50,000 Kentucky Summer Grand Prix saw 43 entries that competed over a course designed by Mexican course designer Florencio Hernandez. While the course did not initially seem daunting in size or technicality, only four riders returned for the jump-off. In the end, Luis Biraben of Argentina triumphed by completing the jump-off in a time of 43.737 seconds on his 8-year-old gelding Eres Tu. Hot on his heels was Martien Van Der Hoeven on Zerro Leone who gave a double-clear effort in 46.134 seconds. Young rider Kaely Tomeu finished third on Siboney Ranch’s Gentille and Amanda Derbyshire rounded out the top four on Luibanta BH, who is owned by Gochman Sporthorses LLC.

After walking the grand prix course, Biraben did not expect that he would have much difficulty qualifying more than one of his four mounts for the jump-off. Although the course was not overly high or posed any perplexing questions, rider after rider finished with a rail down or just over the time-allowed. Biraben credits his ability to ride his youngest mount, Eres Tu, to a clear round with the gelding’s heart, scope and sharp mind. Although Eres Tu recently turned only 8 years old, he completed each jump like a seasoned professional. For his winning efforts, Biraben was also presented with the Kentucky Summer Classic Leading Rider Award presented by Envisian Products, LLC. Biraben, who is a native of Argentina, recently moved to the United States and splits his time between Wellington, Florida and top shows on the East Coast.

Van Der Hoeven took the early lead in the grand prix class on his grey gelding, Zerro Leone. The pair was third in the original order-of-go and seemed to have no difficulty completing the course in the tight time-allowed. Van Der Hoeven has successfully competed Zerro Leone, who is owned by Augusta Pines Farm of Spring, Texas, in several major grand prix events including the $225,000 Sapphire Grand Prix at the Devon Horse Show as well as the Mary Rena Murphy Grand Prix, which is annually held during the Kentucky Spring Classic. He and Zerro Leone will make their next appearance together at the Hampton Classic Horse Show and the HITS $1 Million Grand Prix in Saugerties, New York.

Tomeu and Derbyshire were the only two female athletes to produce clear rounds in the Rolex Stadium. Each of them had a fast round but were unable to complete the short course without 4 faults. Derbyshire, who was second on Thursday night in the $25,000 Hagyard Classic Grand Prix, was also one of several riders to have multiple horses in the class, piloting three in all.

On a beautiful afternoon at the Kentucky Summer Classic, Jeff Gogul continued to dominate the $5,000 USHJA National Hunter Derby, sponsored by the World Equestrian Center and Kentucky Horse Shows, LLC. During the first week of the Kentucky Summer Horse Shows, Gogul of Wilmington, Ohio won the derby aboard Cortese, a 7-year-old gelding owned by Stadium Horses LLC. He returned to the Stonelea Ring on Saturday to top the leaderboard with Quite Ruffy, a 15-year-old Swedish Warmblood gelding owned by Pamela Kahn. The pair won the Cleveland Derby in July and placed tenth in last week’s derby at the Kentucky Summer Horse Show.

During the first round, Gogul and Quite Ruffy earned an 88 plus four additional points for taking all of the high options. Earlier in his career, Quite Ruffy was a grand prix jumper before transitioning to the hunter ring about four years ago.

Out of 49 entries in the week’s derby, only the top 12 combinations from the classic round were invited back to compete in the handy. In the handy round, Gogul and Quite Ruffy confidently tackled the trot jump and took advantage of the inside turns to earn a score of 92 after also taking all of the high options once again. Gogul is no stranger to the USHJA National Hunter Derby winner’s circle and he received a pair of F. Lli Fabbri tall boots in addition to his commemorative blue ribbon at the conclusion of Saturday’s competition with a final tally of 184 between both rounds.

David Beisel, who won the $50,000 Rood & Riddle Grand Prix aboard Ammeretto on July 30, enjoyed competing in the Stonelea Ring on Phyllis Harlow’s Lavish, a 12-year-old Westphalian gelding. In the first round of the derby, Beisel and Lavish earned a total of 90 after the four high options were calculated into the total. In the handy, they received a score of 93 with the four high options, and they were only one point behind Gogul and Quite Ruffy with a total of 183.

Sophie Gochman placed third on Gochman Sport Horse LLC’s Trumpet, a 9-year-old Dutch Warmblood gelding, after earning an 85 in the classic round and a 91 in the handy.