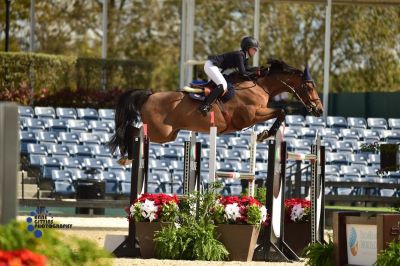 Sunday’s challenging class saw an elite group of four pairs rise to the top as the only jump-off returners, two of which were family members in the form of Lucy Deslauriers (USA) and Mario Deslauriers (CAN). Besting her father and the rest of the international pack as the youngest competitor in the class, 21-year-old Lucy jumped mother Lisa Deslauriers’ Hester to the top of the leaderboard, making it a true family affair with mother, father, and daughter all represented in the top of the standings.

“I just have so much gratitude for my horse,” commented Lucy on Hester, a 2005 Belgian Warmblood gelding by Wandor van de Mispelaere x Palestro vd Begijnakker. “At the beginning of the week, I definitely felt a little bit rusty. I’ve actually been at school for the last two months, so this was my first week back in the show ring. I think the result is just a testament to my horse and our team because they’ve kept my horses in shape and kept him ready to go for when I got here. Huge thanks to them. I’m so happy!”

Sunday’s feature contest attracted 45 horse-and-rider combinations hailing from 11 nations, including the United States, Ireland, Canada, Great Britain, Israel, Switzerland, Brazil, Mexico, Colombia, Chile, and Egypt. For the first round of riding, course designer Anthony D’Ambrosio (USA) constructed a pattern of 17 efforts up to the 1.60m height, a track fit for the occasion of a CSI4* class. It took until the 29th entry in the start list to see a clear round, which came from the younger Deslauriers, Lucy, and Hester as the successful pathfinders. Jessica Springsteen (USA) and Don Juan Van De Donkhoeve forced a jump-off with their clear round, and Kent Farrington (USA) soon followed suit riding Kaprice. The elder Deslauriers, Mario, turned in the final fault-free ride on Bardolina 2.

“I really had to stay focused and stick to our plan,” noted the winning Deslauriers of her plan in the first round after so many rides with faults from competitors. “We had a pretty clear layout of what I wanted to do and what I needed to do based on what we thought would lead to a clear round, so I couldn’t really think about the fact that nobody had gone clear yet. I really just had to stay super narrow-minded, like tunnel vision almost, toward our plan.”

For the jump-off, D’Ambrosio produced an abridged course of eight fences that featured plenty of options to cut time off the clock with tight turns or quick gallops. First to go, Lucy and Hester once again set the standard with a foot-perfect ride in 35.06 seconds. Though Springsteen and Don Juan Van De Donkhoeve (Bamako de Muze x Heartbreaker) put in a valiant effort with no rails down, they missed the top spot by a margin of a second, tripping the timers in 36.21 seconds. The paternal half of the Deslauriers and Bardolina 2 (Clarimo x Landos) went third due to a thrown shoe from Farrington’s Kaprice, and the team continued the clear streak but logged a time of 38.23 seconds to slip into third position with only one left to go. As the final entry, the ever-speedy Farrington galloped Kaprice through the course on pace to test the leaders’ time, but downed a single rail to incur four faults for fourth place.

“I haven’t really gone for it in a jump-off with him,” commented Springsteen, who spent the year in Europe, “so I was going to do a safe and clear ride, then I decided it would be good practice for us to really try and go a little bit. I tried to do as neat of turns as I could. I was really happy with him! He’s amazing – he has all the scope, he’s super careful, and he’s very reliable. Wellington is like home to me, so it’s nice to be back and I’m excited for the rest of the season.”

The win is an auspicious start for Lucy’s and Hester’s winter season as they make their return to the show ring following their last competition in Traverse City, MI during the American Gold Cup in September.

“To ride with my daughter is so exciting,” remarked Mario. “We have had a few placings like this – first and second or first and third – so it’s always our goal. I love it when she goes a bit before me so I can concentrate on myself after. I get nervous when she goes so it’s good to get that done first. Our horses jumped great, so we are going to have a good family dinner tonight!”

Lucy mirrored her father’s thoughts on competing as a family, saying, “It’s so much fun. I think it adds fuel to our fire because we want to be more competitive against each other. A one-two finish is the goal, so we just want it even more when we both go clear.” She continued to say that though they are family, their mounts are not similar, meaning different strategies in the class. “We actually have super different horses, so we try to do our own thing and the chips are going to fall where they are. We had a great day, and it goes back to our team – we have such a great group of people and horses.”

On competing back in Wellington under COVID protocols, Mario concluded, “The whole ESP crew is doing a tremendous job. We, as riders, feel very safe. Let’s keep it up for the circuit. It looks great around here.”