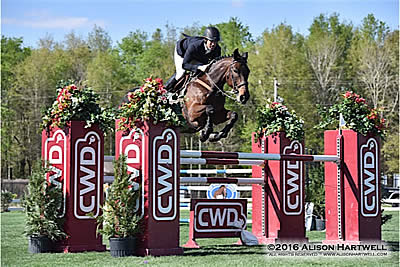 The $50,777 Sidelines Grand Prix, presented by Beau Rivage Resort and Casino, closed out the 2016 Gulf Coast Winter Classic and the USHJA Dash for the Cash King, Andy Kocher of Ocala, Florida, galloped away with the win in the irons of Evalyn Grace, LLC’s Cantu 5.

Of the twenty-eight that tackled the course designed by Paul Jewel of Lambertville, New Jersey, only eight turned in clear first rounds advancing to the jump off.

Kocher rode Postage Stamp Farm’s Prof De La Roque as the first to go and posted a clear round in a time of 82.486 seconds, well within the 89 seconds time allowed.

Kocher then piloted his own Leconte to a clear first round in a time of 84.603 seconds. He now had two rides in the jump off!

Hester Equestrian, LLC’s Clueless P, ridden by Lauren Hester of Lexington, Kentucky, followed Kocher and posted a clear first round in a time of 79.972 seconds and added themselves to the jump off roster.

Charlie Jayne’s Cupid Shuffle, ridden by Michael Tokaruk of Germantown, Tennessee, added themselves to the jump off round after posting a clear first round in a time of 79.117 seconds.

Kocher returned to the grand prix field, this time in the irons of Cantu 5. The pair posted a clear first round in a time of 82.881 seconds, making it his third horse to qualify for the jump off.

Schroeder and Marion Head’s Heliante were the last to go and clear they went in a time of 87.532 seconds and sat in the enviable last to go spot in the jump off order.

Paul Jewell set the jump off time allowed at 57 seconds. Kocher and Prof De La Roque were the first to go, but an unintentional dismount would keep the pair out of the winner’s circle and settling for eighth place overall.

Kocher and Leconte were next in the order but four faults in a time of 51.455 seconds would finish them in seventh place overall.

And that’s exactly what happened when Kocher and Cantu 5 followed Tokaruk and turned in the first clear round in a time of 52.745, taking the lead and setting the new time to beat.

Schroeder and Catungee challenged Kocher’s time and although they went clear, their time of 56.569 seconds would put them in second place behind Kocher and Cantu 5.

Maddrix and Specialized followed Schroeder in the jump off order, but four faults in a time of 50.593 seconds would find them finish in sixth place overall. Schroeder and Heliante sat in the enviable last to go position and although they turned in the fastest jump off round in a time of 49.104 seconds, a heartbreak rail at the final fence would have them finish in third place, giving Kocher and Cantu 5 the win.

“This was a great event and congratulations to Andy Kocher and Cantu 5 on their win today,” commented Bob Bell, President of the Gulf and Classic Companies as well as Classic Publications. “This is the first Sidelines Grand Prix since Classic Publications has purchased the magazine and I thank all of those who competed today,” he said. “All of you are part of Sidelines history now,” he added.

Twenty-three horse and rider teams tackled the highly anticipated $10,777 Legend Jumper Derby on the world class Grand Prix field Saturday afternoon. The 1.30 m jumper classic, open to all horses not competing in the Grand Prix, had a time allowed of 120 seconds which only saw three go clean.

Christopher Schroeder of Wellington, Florida and Elizabeth Win’s Dubai B were the first to go and posted a clear round in a time of 101.824 seconds, setting the new time to beat. Newtown Jumping Jack, owned and ridden by Thomas Welsh of New York, New York, followed Schroeder and while they beat Schroeder’s time with their own 100.219 seconds, four jump faults would finish in eighth place overall.

Alex Turner’s Vanrock, ridden by Michael Tokaruk of Germantown, Tennessee, posted a clear round and set the new time to beat at 97.926 seconds, taking the lead.

Amanda Forte of Glenmoore, Pennsylvania and Cerulean Stables’ Rincoola Black Adder challenged Tokaruk and Vanrock’s time with their own 89.980 seconds. However, eight jump faults would find them out of the ribbons.

Trapp O’Neal of Magnolia, Texas and Carolyn Elsey’s Quilona Z followed Forte and posted an eight fault jump round in 97.953 seconds, which would see them finish in twelfth place overall.

Margaret Camp’s Charmeur, ridden by Holly Shepherd of Grand Bay, Alabama, tackled the course, but their time of 98.555 seconds with four jump faults would see them finish in seventh place overall.

Eagle Valley Partners’ Coconut, ridden by Andy Kocher, followed Shepherd and turned in an eight fault round in a time of 93.638 seconds, which would find them finish in eleventh place overall.

Kocher returned with his own Red Lady, but with eight jump faults in a time of 89.002, the pair would have them finish in tenth place overall.

Rico S, owned and ridden by Sara Dees of Chatom, Alabama, followed Kocher and Red Lady and posted a four fault round in a time of 96.931 seconds and would finish in sixth place overall.

O’Neal followed Dees in the order, this time in the irons of TKO Partnershjp’s Camero, and turned in a four fault round in a time of 100.990 seconds. They finished in ninth place overall.

Riptide, owned by Christina Van Patten and ridden by Brooke Kemper of Culpeper, Virginia, followed O’Neal and turned in a four fault round in a time of 93.509 seconds and placed fourth overall.

Holly Shepherd of Grand Bay, Alabama and Dejan Krunic’s Belle Clara DKS followed Riptide and turned in a lightning fast clear round in 91.474 seconds, taking the lead and moving Tokaruk and Vanrock into second place.

Sitting in the enviable last to go spot was Kocher and Showcase 81, LLC’s Mullentine Imperial. The pair posted a time of 93.751 seconds, but four jump faults would see them finish in fifth place overall.

“The $10,777 Jumper Derby is one of the most popular events at the Gulf Coast Winter Classic,” commented Bob Bell, President of the Gulf Coast Classic Company. “We are delighted that Merial and its product Legend sponsored this competition and appreciate their support,” he added.