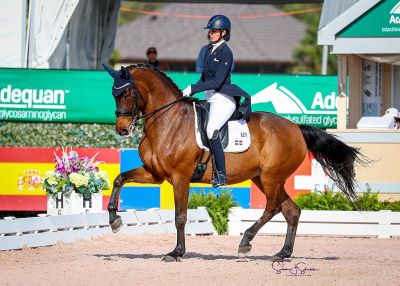 Losos De Muñiz and the 2005 KWPN mare by United rode to a personal best score of 74.196%. “I’m through the roof,” she began. “I think it’s one of the first times in my riding career with her that I’ve actually gone in and have had the control, the relaxation, the activity, all of those words that we use and search for in dressage, I actually went in there and went ‘WOW, I’ve got it. Now what do I do with it?’”

The pair was originally supposed to be competing at the FEI Dressage World Cup™ Final in Sweden this week, but after it was cancelled, Losos De Muñiz and the mare regrouped. “Because we had all of that time off last year due to COVID,” she explained, “our buildup was for the World Cup Final. It’s such a satisfaction for me to see that my training, my planning, is peaking now when the Final would be taking place. I never thought I’d get a 74% with her; she’s a bit of a difficult character, but it all fell into place today. It’s just years and years of practice and trial and error. It all just lined up for us. She was in there saying, ‘Yes ma’am, how much do you want from me?’ and that was an amazing feeling.”

Though Losos De Muñiz originally tried the mare while searching for a horse for a client, she quickly decided to make the purchase with her husband. “In the beginning,” she remarked, “she gave me a lot of power, and I knew that if I could get that on my side it would be amazing. We decided to try, but I never saw her as my top horse. I always saw her as my backup, because we always need that, but I thought she’d be a cool one to bring up the levels. She’s gone from my backup [horse] to my number one. She’s very opinionated, but I am too. In the beginning we did clash, but I got over that quickly. It’s the coolest thing when you’ve got such a powerhouse with such an opinion, who is on your side going, ‘Let’s do more!’ She’s there knowing her job and wants to do it right, and that’s a great feeling.”